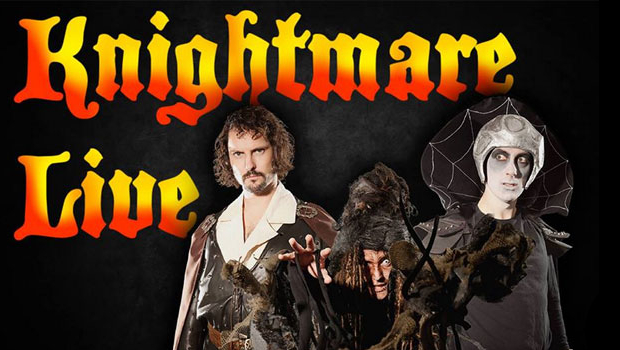 Knightmare Live is a spin-off to the famous late 80s to 90s television show, where a bearded man sends kids to their death inside a dungeon, with the help of being made blind – this is actually a thing. The stage adaptation replaces the kids with adults (most of the time), and they are guided by two guest comedians, in our case, two members of Austentatious.

The performances that come from the show’s leads, Paul Flannery (Treguard) and Brendan Murphy (Lord Fear) is what breathes life into Knightmare Live. Their improvisation is a joy to watch with the audience and each other, this is also reinforced by an equally talented supporting cast who manage to bring the Dungeon to life through their characters and creations.

The sets and props are substantially less impressive this year, but I believe for that to be a good thing. It has given way more focus onto the player’s journey and encounters with characters, not rushing to reach set pieces before an hour is up.

If you’re a Knightmare fan and haven’t already seen this show – what are you doing with your life? This may be their best iteration yet.

Knightmare Live: The Game Has Changed is on everyday at the Pleasance Dome from 7pm, until Sunday 28th August 2016.