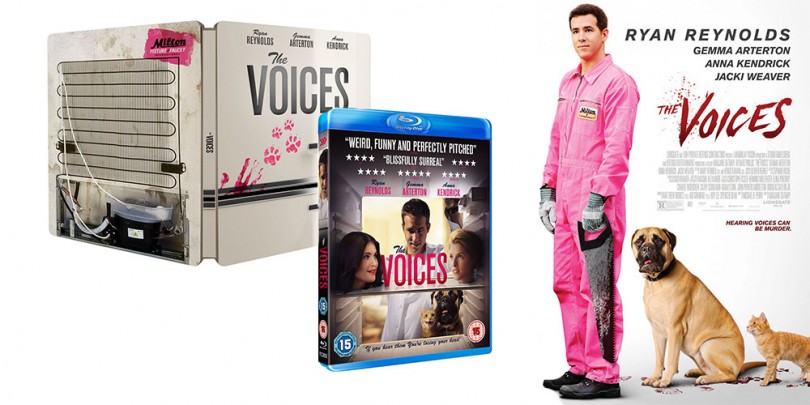 The Voices is a dark comedy featuring Ryan Reynolds, who plays Jerry, a mentally challenged factory worker who has leading conversations with his pets.

Every now and then, you get these small indie films where you see the actors putting their heart into it, this is Ryan Reynolds’. The more you get to know about the film, the more you’ll see this, from the fact that Ryan chose to voice the pets himself to the passionate interviews he has given while promoting the film in the past year.

The film takes a while to get on board with, but as soon as we did, we were in for a ride. There’s plenty of twist and turns, and genuinely start to sympathise with the character. One of the stand-out things is the talking animals, it’s weird at first but again, as soon as you get over this and get in Jerry’s mind, you start to see things in a new perspective.

As always, we’re big fans of extras, and highly believe that it’s one of the main reasons that physical films are still on our shelves so we were excited to see what The Voices provided. What we get is some very raw features filmed on set, they’re not highly polished in anyway but if you’re a film geek, you’ll appreciate the insight of how they filmed everything.

One of the things we loved about the release was the house style throughout, from the cover artwork to the menu, it’s all one fluid theme and gives it that tint of polish that we seem to be loosing at the moment, lot’s of care and thought has clearly gone into it.

The Voices is released on DVD, BluRay and limited edition Zavvi.com Steelbook through Arrow Films on Monday July 13th