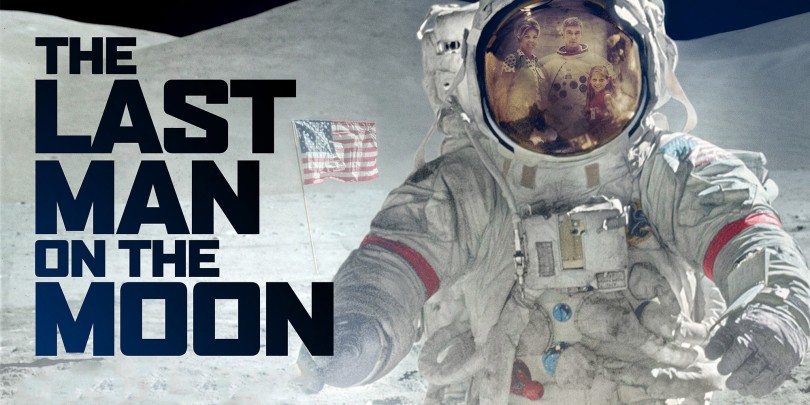 SPACE, the final frontier. Captain Kirk’s quote has become a bit of a cliché when it comes to talking about space exploration and Sci-Fi cinema, but everyone has to admit that it is accurate. For years it looked like most of the world had given up on exploring that frontier, but in recent years with billionaire private companies investing in the technology to take us to Mars and further, in symphony with films embracing this new interest once again with movies like Nolan’s Interstellar (2014) and Ridley Scott’s The Martian (2015) showing us a more aspirational and utopian outlook than the bleaker Sci-Fi films of the past. So the question you have to ask then is “Why make a documentary about the final Apollo Moon mission?” What new information could this film bring to a time in history that has had countless films made about it?

What is different about The Last Man on the Moon (2016) is that it presents a very personal and relatable look at the space race rather than a focus on the missions themselves. The focus of the film is on a relatively unknown astronaut, especially to a British audience, his name is Gene Cernan and the film shows us his journey from a fighter pilot to walking on the moon. What really makes this an interesting and different documentary is that the actual focus of the film is everything between these points in his life and the incredible and sorrowful sequence of events that got him to the Moon. The film is simple but engagingly structured around the multiple missions that Gene was involved in, first we see him being used as human test dummy for one of the early Gemini missions in which he attempted one the first spacewalks, the film visualises this really well with a simple but affective recreation. Usually this is something I don’t like to see in cinema documentaries as the quality is usually poor and makes the whole film feel very televisual, but clearly in this the filmmakers have spent time designing the look of this very small scene to make sure it mixes perfectly with the archive and contemporary interview footage. Mentioning Interviews brings me to something that did grate on me a bit and that was the overuse of the talking head interview pieces, I understand that with some people the filmmaker may have had very limited time to interview, but many of these to-camera moments could have been made more emotive by bring the interviewees to the real world locations. They use this on the spot technique with most of Gene’s interviews and so I can understand that they wanted to make him the focus and so kept the other contributors on screen presence as minimal as possible, but it could have been used in a few occasions where what they are saying directly relates to Gene’s story.

One of the topics the film keeps returning to is the effect of the astronaut lifestyle on the family, we repeatedly see Gene questioning the selfishness of his and the other astronauts distanced lifestyle and this really separates the film from other documentaries, the usual interview questions and responses in traditional documentaries relate to how nerve-racking the launch is or how amazing the surface of the Moon is, of course it’s amazing your standing on the MOON! This film give very personal look at the life of an astronaut and by doing so the film makes Gene a very human and relatable character rather than the usual heroic and superhuman presentation in other films. The result of this is that when we finally get to landing on the moon at the end of the film, which I should also point out has some of the most stunning visuals of the Moon I have ever seen on film, it is a much more emotive experience as not only have we seen the luck and struggle it took to get there but also the film has brought us very close to Gene as a human being and so it makes you feel every emotion as he does. Gene says in the film that he only wished that he could pull that experience into his suit and bring it back to earth with him and that is what the film does is create an experience as close to the real thing as possible, which is an incredibly skilled thing to do.

Overall the film uses a range of stunning visual techniques (animation/recreation/CGI models) and beautiful archive footage to tell a very unique, personal and human story that looks beyond the astronaut who walked on the Moon to explore the man, the friend, the husband and the father. There are a few small issues with interviews and a tendency to open up interesting points but not explore them thoroughly enough, but as a whole piece the film does a brilliant job of offering a balanced argument of the emotional pros and cons of space exploration and end with a heart-warming and positive message that anything is possible with a little bit of hard work and sacrifice. To quote Gene himself “Dream the impossible and make it happen“.

The Last Man on the Moon is available on iTunes and On Demand from 15 April www.TheLastManOnTheMoon.com/