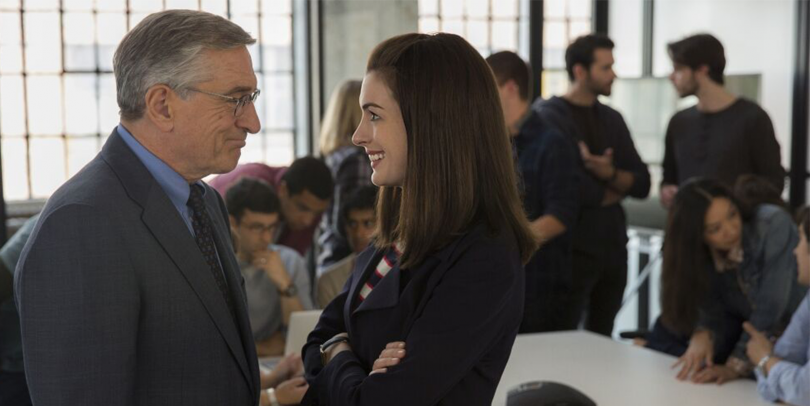 The Intern could of easily fallen into a paint-by-numbers genre film but manages to stand out from the crowd with two incredibly talented leads mixed with a compelling premise.

Jules Ostin’s (Anne Hathaway) character is the owner of a start-up clothing business which decides to bring in a “mature” intern scheme, such Ben Whitaker (Robert De Niro) is hired. The Intern follows the unusual relationship of the boss and older-than-average intern.

As previously mentioned, this film is not out of the ordinary and the barriers aren’t pushed but it is a delight, making it rise above the rest for it’s genre. It never outstays it’s welcome and you’re always incapsulated in the events unfolding.

There’s plenty of laughs to be had. The chemistry between Robert De Niro’s character and the other interns is such a joy to watch unfold on screen, offering a perfect place for comic relief when the drama begins to build. Also, there’s a very odd but charming sequence with the interns that we wont spoil but deserves a mention!

Where the film was in danger was with it’s casting of the leads, but having the talented Robert De Niro and Anne Hathaway at the helm was a safe bet. After De Niro’s past few years, it’s nice to see him fully committing to the role and not just being “Robert De Niro”. The dynamic between them feels genuine and there are several heart-felt moments frequently placed throughout the narrative.

As the film drew to a climax, it does head in a direction was unexpected, trying to rectify a situation that felt forced in to create a big finale but it really doesn’t pay off – minus this, the film is pretty much as good as it can be.

The Intern is out in UK cinemas now!