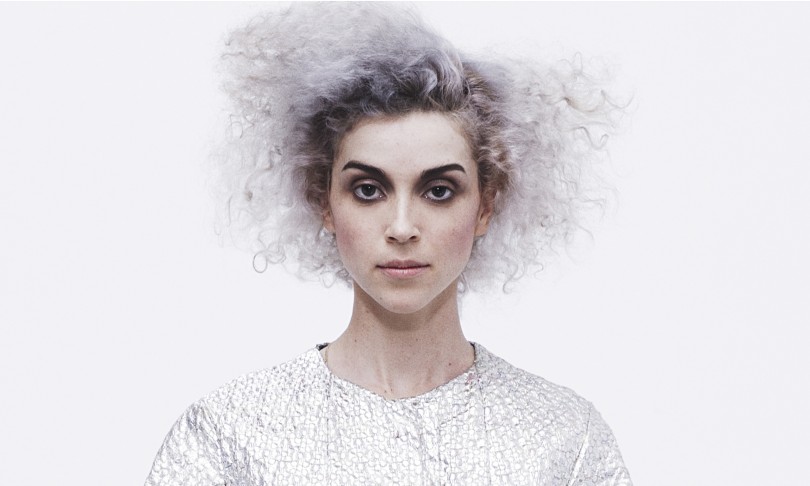 Annie Clark, aka St. Vincent, has been one of the most interesting things to happen to rock music in the last five or so years. She has released four full-length albums all of which continue to heighten her success with every release. Her third album, Strange Mercy, was released back in 2011 and was praised by both critics and fans alike. Personally it is my favorite St. Vincent album and I’ve continued to listen to it on a relative basis for the last three years. Many people, myself included, have been highly anticipating this album after the success of Strange Mercy. Does it live up to the hype? We’ll just have to see.

In the last few months St. Vincent released a few songs to promote this new album. Of these, the two officially released songs were “Birth in Reverse” and “Digital Witness”. Honestly when I heard these I wasn’t that impressed. “Birth in Reverse” just seemed so chaotic, there were so many things going on at one time, nothing like what St. Vincent is known for. What I loved so much about Strange Mercy was the contrasts. Not just the louds with the softs but the ethereal vocals and baroque instrumentation with the distorted guitar and synthesizers. A song like “Digital Witness” is always in your face blaring with its horns and vocals. Not that St. Vincent can’t try something new but this style was what really made them so special and unique. So when I got a chance to listen to this album in full I was happy to know that they hadn’t given up their best trait.

That being said there are songs that are entirely loud, that get right up and personal with you as well as ones that are entirely soft, really emphasizing the beauty in St. Vincent’s music. Songs such as I “Prefer Your Love” and “Severed Crossed Fingers” do a great job of this and help diversify the album being placed at the middle and end of it.

Both of these styles are done in such a spectacular manner but the songs that really stand out are the ones that mix both of these ideas. One of my favorite songs on this album is “Regret”. It is a very simple song by St. Vincent’s standards but I think it is the best. It starts with a perfectly balanced mix of synths and guitar, something that is truly impeccable considering so many different artists and bands have tried doing this to lackluster results. When listening to this part its hard to quite point out whether the synth or guitar is the main instrument in this section. Then it moves into a part that really showcases the talent of St. Vincent’s vocals. At this part its as if the vocals were taken from a centuries old church choir. Its contrasts like these that really prove St. Vincent’s worth to modern music.

“Huey Newton” is another favourite of mine. It starts with a beat and synth line that would fit well in a West Coast Rap song. Annie enters with some very sultry vocals. Then a new synth line creeps in with a very 80’s style. Out of nowhere come some monumentous guitars come crashing in. From here on out it’s as if a female Jack White took over. The loud guitars and swaggering vocals perfectly emulate him.

“Psychopath” and “Prince Johnny” are songs that I think best fit the traditional St. Vincent style. The melody is pass from one instrument or style to another. The song is constantly changing and your mind is left to focus on the one thing in front of you without being overloaded.

In all this isn’t my favorite St. Vincent album, but by no means does that mean its bad. This is a large step for St. Vincent’s sound. St. Vincent has used a lot of synths in her music before but never have they been this confident. The synth is used almost more than the guitar (Annie’s primary instrument.) This has created some of my favourite tracks from the album that will forever stand out as favourites in the St. Vincent discography for the rest of time.