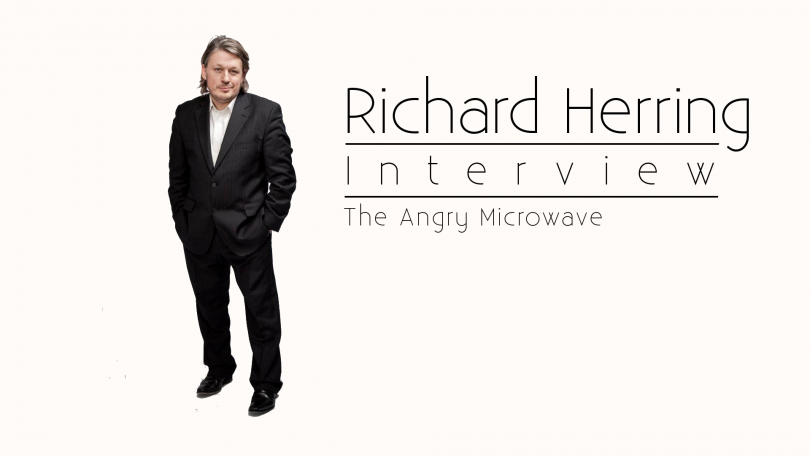 It’s been just under a year since I last spoke to the very talented Richard Herring so I thought I would catch up with him to talk about a variety things, from his recent trip in the Alps all the way to how evolving tech has been important in his career. First of all though, let’s take a look at him in action while performing as part of Set List.

CM: Hello Richard, thanks for joining us today. How has your recent trip been in the Alps?

RH: It was a bit of a challenge for me. I didn’t think I would really enjoy skiing or being in a chalet with loads of other people, but it was very enjoyable, mainly. Though still not sure that skiing is for me. It hurt my ankles.

CM: All your content is freely available, whether it’s your shows on Netflix, free audio of RHLSTP (Richard Herring’s Leicester Square Theatre Podcast) & RHEFP (Richard Herring’s Edimburgh Fringe Podcast), your blog etc, is this something that you actively set out to do?

RH: I decided a few years ago that I would rather get stuff out there than wait for broadcasters to commission and pay me. And it’s had the unexpected bonus of serving as an advertisement for what I do and people appreciate it enough to pay for tickets to my live shows or DVDs. And broadcasters have seen what I can do and I have got paid work out of it. But really it’s just about seeing my stuff produced rather than working in a bit of a vacuum. I’ve written about 7 TV scripts in the last decade and only one of them has made it to the air.

CM: With the podcasting and blog, how important has the rise of technology been to your stand-up career would you say?

RH: It’s given me autonomy which means I can make the shows that I want to make (budget permitting) without interference from executives. in 1989 when I started if you wanted to broadcast to the nation (or world) then you would have to get a job on a radio or TV station, but now if you’ve got a computer you can do it yourself. I have managed to find a niche for myself online where I can reach the people who like what I do and find new fans too. Online you only need tens of thousands of listeners to be a hit and ultimately (if they come to the live shows) make a good living. All in all the internet (and returning to stand-up which was a consequence of the blog) has saved my career. Without it I am not sure I would be working as a comedian any more.

CM: Most of your London based shows and podcasts are held at the lovely Leicester Square Theatre, what is it that you love about this venue so much?

RH: They are happy to put my stuff on which is a good start. And they seem to appreciate what I am doing. But it’s a nice medium sized space and the audience are all close enough to see and it’s very central, so it all works well for me and hopefully for them.

CM: Back when we last spoke to you on our sister site cmoorin.co.uk, you were still planning “Richard Herring’s Meaning Of Life”, now that you are in the middle of recording them, have you been pleased in how they have been going?

RH: It’s been a learning experience, but the first one is nearly ready and I am pleased with the content and learned a lot about the execution. It’s great to be able to spend ten minutes on a routine about say, the opening pages of the New Testament or talking to an academic about the subject, which might make TV people nervous. I am pretty sure they will get better as the series progresses, but one of the nice things is that even if the opening ones are a bit sloppy in places then no one can cancel the series except me! It will be interesting to see what people make of it once it’s up. There’s a great title sequence and an animated sketch each week, as well as new stand up (with occasional bits that obsessive fans might be familiar with) plus an interview. I think the format works well and I am enjoying the challenge of writing one a month. Hope people like it and that some of them will feel like paying towards a longer version (or making a donation). It’s going to cost me about £20,000.

CM: Also last time we spoke to you, it was just after you announced there will be a video version of RHLSTP available for small fee. Are you happy with how this has gone so far?

RH: It’s worked OK. The first series we filmed made a modest profit and the second one has broken even, but the money isn’t really important. It’s great to have a record of them and it adds a whole new dimension (vision!). I think perhaps the format is more suited to audio and that a lot of people like to listen to them whilst they’re doing something else, but enough people are watching them to make it worthwhile. And of course the Stephen Fry footage ended up being shown all over the world. I think we’ll be glad we have them on film in the future, though it’s a lot of work for the team.

CM: You are about to embark on another leg of your WAGTD (We’re All Going To Die) tour, how do you feel the audience so far have responded to this show?

RH: It’s been going very well. It’s my tenth different stand up show and I think it’s a nice mixture of gags and more thought provoking stuff. I was worried that the subject matter might be hard to make amusing or that people wouldn’t want to laugh, but they seem to be laughing. And turning up. And not leaving until it’s finished. So that’s all good!

CM: Have you had any comical/weird/scary/unnatural encounters while touring WAGTD?

RH: I don’t think there have been yet. Touring is generally pretty dull. I turn up at a town, do the gig and then drive home again. But that’s how it should be. My main focus is to make the show as good as possible.

CM: We know it’s early but any plans for the Edinburgh Fringe 2014 yet?

RH: I think I am going to be doing a more general stand up show (maybe less serious than the last few years, just concentrating on being funny!) called “Lord of the Dance Settee” and it looks like I will also be writing a play about one of the men involved in the murder of Rasputin, provisionally entitled “I Killed Rasputin”

CM: Thanks for your time and we are sure we will see you live again soon!

You can keep up to date with all of Richard’s gigs and numerous other content by visiting his website www.richardherring.com and following him on twitter @Herring1967.