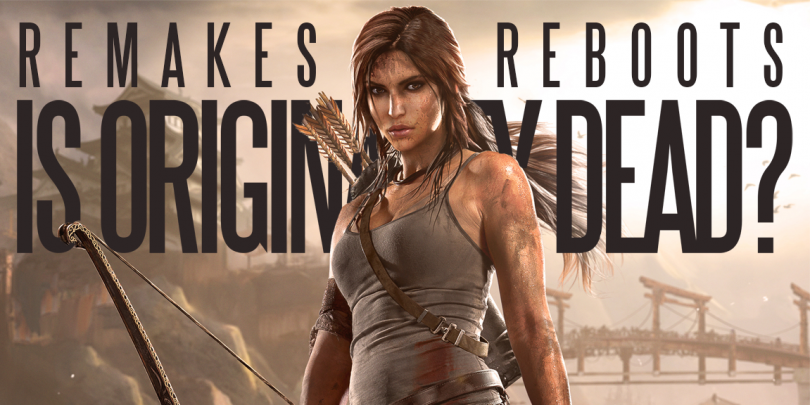 Since the birth of the current console generation, “Remake” and “Reboot” are words frequently on the lips of many disgruntled console owners. Many feel underwhelmed by the amount of remakes that have been filling up store shelves in an attempt to flesh out some poor first party line ups that early adopters have endured. The past E3 has opened this can of worms once again, as reboot, after remake, after reimagining have been churned out making it a bigger talking point than ever before. Kicking off Bethesda’s E3, we were showed a meaty gameplay trailer of Doom playing on the huge nostalgia for the prodigal son of first person shooters.

Most fans of the Doom series welcome this new rendition with open arms but I can’t help feeling that Doom has a significant flaw in design, as do many games remade from old classics. From what we saw of gameplay at Bethesda’s conference it appeared to be a re-skinned corridor FPS with tighter controls and a few interesting map building features, retaining the lack of purpose other than pure destruction that the original was famed for . This sounds great at first but is this what gamer’s want in the current gaming climate? The insatiable need for an open world or, tight knit complex narrative are evidently absent in Doom which for younger audiences weaned on the popcorn style of Call Of Duty or the sprawling open worlds of the Elder Scrolls series could inevitably fall flat.  We will have to wait and see if gameplay alone is good enough.

This current console cycle has certainly had its teething problems with many gamers finding that the exclusives weren’t up to par. Xbox’s Ryse: Son Of Rome didn’t live up to the billing and Sony’s Killzone: Shadowfall and Infamous: Second Son both struggled to be that system seller the people wanted. The lack of first party titles has led to the saturation of remastered, definitive versions of relatively new games. The question is should we buy these games and how will it benefit and hinder the industry?

The Last Of Us: Remastered and Tomb Raider: Definitive Edition were released to flesh out this library, and as much as gamers groan about old games being re-released I can’t help but feel its beneficial to the industry. Take The Last Of Us, which was for many gamers was their stand out game of the year for 2013; one of which many Xbox 360 owners would have completely missed out on if not for the remaster. Not everyone can afford both consoles, so for many this would be their only option to play it.The mass migration from console families, ie Xbox 360 players to PS4 has played a big factor in this issue.  With the best selling console of this current cycle being the Playstation 4 it makes logical sense to get the game in the hands of new adopters casting their post apocalyptic net even wider a few years before the imminent announcement of Last Of Us 2, which is already being rumoured. For less time and money than making a brand new game, Naughty Dog can introduce new fans to the game whilst helping to fund a possible sequel. It’s true the angry hordes of gamers wanting newer titles have justification for their cause, but if a developer has a clear way to make a sure fire buck for less time and money than a brand new idea whilst also helping to fund other projects and letting an untapped mass audience experience something new for the first time, surely that’s beneficial? What if the games budgetary requirements fall short, if not for the success of the re-master, an assumption yes, but still food for thought?

The flip side of the coin, are the loyal fans that don’t want to play the same games in a slightly better resolution, the loyal fans who stuck with their console through thick and thin missing out on their competitors success and revelling in their own. Here is part of the problem, gamers allegiances to a specific console, doesn’t justify anger towards re-mastering’s that allow owners of the other consoles to play the game, the “I played it first time around you should get a (insert console of preference) if you want to play it; A doesn’t allow for developers to make money on an audience that wants its content and B is forcing people to play the older versions of games by buying an older console or going without.. Remaking a game for an audience that could have picked it up a year prior does seem a waste of resources, which is why most developers outsource studios to make the port, showing that the production of a sequel can still run uncompromised. I’m glad games get remade, because it gives us the gamers far more options, I’m currently playing Grim Fandango: Remastered and I’m so glad I have a chance to replay this gem that I would otherwise never have experienced. Making classics accessible is great for younger gamers, on a relevant console with great added features its simply giving the gamers that missed out more options.

New IP is a huge risk for companies and thankfully E3 2015 has somewhat quelled the absence of brand new AAA titles. Horizon: Zero Dawn on Playstation 4 and Recore on Xbox One, as well as both Ubisoft and EA showing off For Honour and Unravel have demonstrated that originality isn’t dead, it had just stunted with the announcement of the new consoles. New ideas have become riskier with monumental budgets funding games; companies need to please shareholders with sure profits and unfortunately that’s the business world of gaming. Epitomised by Ubisoft’s annualising of Assassins Creed, with its proven formula that leaves little space for original risk taking, leaving many gamers, including myself burnt out on the franchise we had previously been a fan of.

As with any entertainment medium innovation is allowed to flourish, in the indie space. Cuphead, a homage to hand drawn cartoons exemplifies the freedom developers can have with a smaller budget and less pressure to appeal to a mass audiences, being one of the most exciting projects to come out of E3. Unravel published by EA, developed by Coldwood Interactive (a team of only 14) have produced arguably my game of the show and they’re both indie titles! Publishers have finally realised that many gamers want these niche experiences and have backed the smaller studios to make these products a reality.

This E3 has finally shown why we should own both the big hitters, granted it will be a few years before the likes of FFXII, Recore and Horizon: Zero Dawn will be on stores shelves but, it’s a start. Unfortunately for Nintendo, the general consensus amongst gaming journalists elicit the end of the Wii U with new Zelda and Mario games expected to be announced along with the announcement of NX next year. In the short term it’s a disappointment but at-least Nintendo have realised the Wii U’s shortcomings and are focusing on the future.

The abundance of collections announced this year have been more prevalent than I can remember, Halo’s The Master Chief Collection and Uncharted’s The Nathan Drake Collection (out this October) give gamers revised classic gems in one simple neat, higher resolution bundle that has unsuspectingly become a fantastic marketing tool for developers. Bringing out these collections allows gamers to catch up on everything they missed out before the new iterations are released. It speaks far more to have a playable recap than an advert on TV, and giving gamers a choice to invest into a franchise without having to go back and play on out-dated hardware is a huge plus for fans. The availability of all the previous games before the launch of the newest one, gives players completely new to the franchise enough time to get through the previous games, and with Halo and Uncharted being so critically acclaimed, anyone jumping ship that hasn’t experienced these now can. I know I certainly will be.

E3 2015 was made so great for many by the overabundance of nostalgia thrust in our unsuspecting faces. The long awaited Final Fantasy XII remake that has a meaty seven-hour montage of reactions of the announcement alone.

Square Enix played heavily on the reveal of a remake making one of the most talked about games at the show. The simple word “Remake” at the end of the reveal was enough to have audiences cheering with elation, which goes to show how much gamers really do want remakes of their favourite games.

This wasn’t just the only game, given a spit’ n shine reboot, with a the announcement of a new Hitman, Doom (as mentioned earlier) and Need For Speed to name a few, the demand is definitely there.

The power of next gen has allowed creators to perfect their original ideas with refined game engines and a higher graphical fidelity. The remake of Ratchet and Clank (a childhood favourite of mine) has me giddy with excitement at the idea of once again controlling my wrench wielding childhood hero and his little metal companion, all in a beautiful Pixar style animation. I will through the nose to be able to have it in my hands now, so am I part of the problem?

Simply no, nostalgia for an old game isn’t a bad thing as its why we have fond memories and have a connection with games in the first place, the possibility of even coming close to that initial wonder of experiencing your favourite game for the first time is exciting. The problem is tarnishing the preconception we have of the games we love, a game you remember as being great could have been great for that moment in history but looking back can be mechanically out-dated for now, that’s not say its bad its just other games have mostly probably innovated in that time. It’s this perpetual innovation and copying of ideas that means that the rebooted games will almost entirely never live up to the hype unless they innovate once again. Its human nature to remember entertainment in a far better light, and this makes the creation of the remake a far harder task than making something new because of the overwhelming expectations. Creators need to find the delicate balance between innovation and nostalgia, the audience is already there, but what is essential is making them relevant for today’s audiences