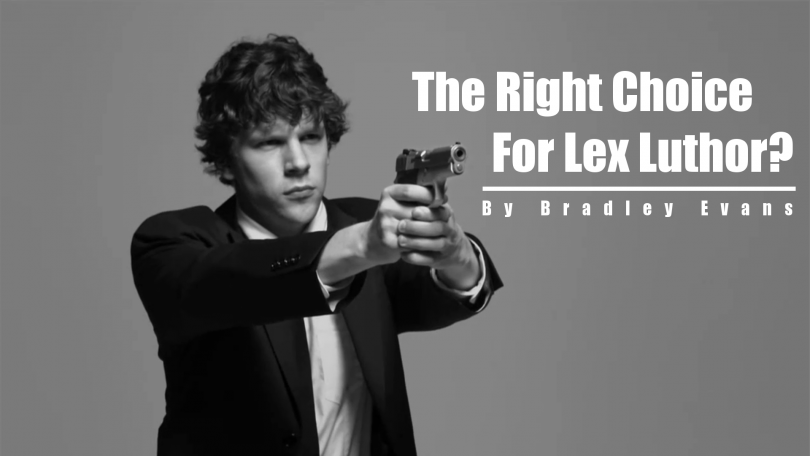 So the 3 major character additions to the Man of Steel sequel have now officially been cast. Ben Affleck as Batman was met with many groans because, well, his first portrayal in a comic book adaptation daredevil speaks for itself. I’ll be honest with you, my initial response was a negative one, but like many fans I have slowly come to appreciate the talent that Affleck brings to the project. I would even go as far as to say that I’m looking forward to seeing his particular take on the caped crusader. Then there was Gal Gadot. This one still doesn’t make sense to me. WB/DC have held out this long on introducing Wonder Woman to the cinematic universe because, as the studio admits, she is an extremely difficult character to get right. So why the heck would you even consider an actress with barely any screen experience? Maybe she nailed her audition. Who knows, maybe she has been a hidden talent for all these years.

And then there was the recent announcement that Lex Luthor, the most recognisable villain and arch nemesis to Superman, has now been cast. Could it be the fans choice? Could Heisenberg himself, Bryan Cranston, be the one chosen to play the Villain in a multi-picture deal as reported weeks ago? No? What about Mark Strong, an actor known for pulling off great villainous roles and someone who certainly looks the part with his physical presence? No? Ok, lets just cut to the chase, Jesse Eisenberg, an actor known best for his portrayal of Facebook creator Mark Zuckerberg is the chosen one. Interesting.

The chances are you have seen a Jesse Eisenberg movie, whether it be Zombieland, The Social Network or last years Now You See Me. The biggest complaint I have heard in regards to this casting is that Eisenberg is one dimensional, always playing the same character. Granted, if you look over the actor’s history this does appear to be the case. But my argument is this, Jesse Eisenberg has not yet had a role that requires him to portray anything different. I would be a lot more concerned if he gave several poor performances. And lets face it, none of us are saying he cannot act.

By what I understand, Jesse Eisenberg is a great collaborator and is very particular about every movement his characters make and the direction they are heading. A character like Lex Luthor, who will most likely be a big part of future plans spanning several films, needs an actor like this, who is going treat the character with respect and at least attempt to do him justice.

It really is too early to tell if this is the right casting decision. I don’t buy into this ‘he doesn’t look the part’ nonsense. The studio believes he can pull off the character, and they will make him look the part. The only concern I have is that they pushed the release date back a year to include more Lex Luthor, more Jesse Eisenberg. I am happy they are ensuring the film is the best it can be, but don’t change the script if it was ready to go. You have a justice league to expand the DC Universe.