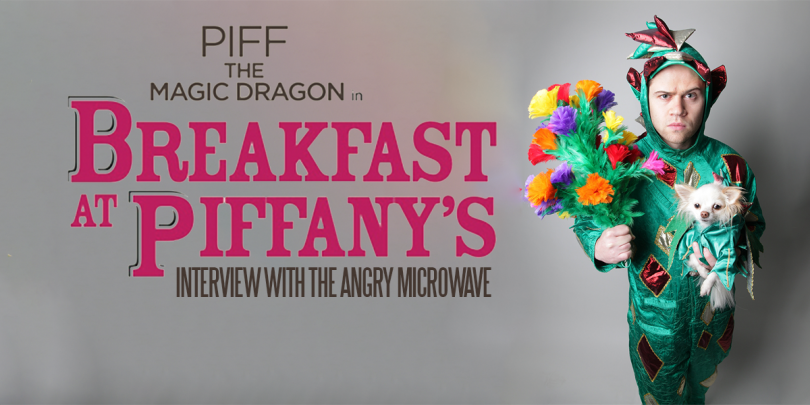 You may recognise him from Penn and Teller: Fool Us or more recently, America’s Got Talent, but this August, you can see Piff The Magic Dragon at the Edinburgh Fringe! We caught up with him to talk about the recent success in the US, what we can expect from the new show and if Mr Piffles could ever go solo.

CM: Hey, thanks for joining us today, how has life been leading up to the Fringe?

CM: Do you want to explain what your act is for people that don’t know?

P: I’m a magic dragon. Sooo… A dragon who does magic? Oh, I’ve also got a magic performing Chihuahua. And a mind reading Goldfish.

CM: You’ve had some major success in the US recently with America’s Got Talent, how’s this been?

P: Better than I could ever have imagined. Who’d have thought what America was crying out for was a grumpy magical dragon with a tiny dog.

CM: Do you find the audiences overseas are different or is everyone equally impressed seeing a magic dragon?

P: Who doesn’t love magic? Apart from 94% of the UK population. Yeh, it’s probably a good job I relocated.

CM: What can we expect from your now show, “Breakfast At Piffany’s”?

CM: Do you ever get afraid that Mr Piffles will ever go solo?

P: Nah. I’ve got so much dirt on him, he’ll never break free.

CM: Currently, you’re running a Kickstarter for Piff-branded playing cards, how’s this experience been creating them?

P: It’s been two years of hard slog. Can’t wait to get them out. Some of the things we’re doing with the deck are a world first. I worked with an artist called Claire Blackledge and she’s knocked it out of the park. Will be very happy to have these bad boys in my pocket.

The Fringe is where I met Mr Piffles. Here’s the story:

In August 2008 I was making my debut at the Edinburgh Fringe Festival with my first full length One Dragon Show. All was well; houses were full, reviews were great, audiences were happy and yet… I felt like the show was missing something. What I needed was a gimmick.

The venue manager had a Chihuahua called Nacho. Nacho was four months old and we got on like a house on fire. But in a good way. My PR suggested that perhaps Nacho should make a little cameo in the Piff show. And so it came to pass. Nacho stole the hearts of the audiences, and I was hooked.

Realising a Dog is for Life, not just for Edinburgh, I did my due diligence and researched the upkeep and maintenance of such a beast.

If you have never owned a Chihuahua, let me tell you, they are one of the most low cost creatures I have ever met. A bag of food lasts three months. They are far more loyal than most of the relationships I’ve had. And their magic skills are second to none.

I was committed. And so I turned to Gumtree the very next day and found Mr Piffles’ cry for help. I set out to the cold, unforgiving land of Dundee, Scotland, where Alfie, as Mr Piffles was formerly known, was being held captive.

On first glimpse I wasn’t sure he was cut out for show business. He was unkempt, mangy, his eyes crusted over and an eight year old was putting the boot in on a daily basis. However, worst case I thought, I should at least get him out of these horrible conditions, and if it didn’t work out between us, I could always rehome him. I paid £400 in ransom money and got him the fluff out.

It was a slow process at the start. He would growl, snap and bark at children. He hid under tables. He soiled more carpets than I had the capital to replace. I would drag him through the rain, swearing under my breath, as onlookers pointed, laughed and stared.

But on stage? On stage he shone. From the get go. Audiences loved him. So I dug in. I took him to the vets. I fed him properly. I found a trainer. And slowly he began to come out of his shell. His coat began to shine. His eyes cleared up. His tail began to wag.

Looking back it took almost a year for him to fully settle in. Now he is without doubt the greatest decision I have ever made. He’s a constant delight, a wonderful companion and a loyal business partner. He maybe a rescue dog, but nearly six years on, I’m the one who feels the redemption.

You can see “Piff the Magic Dragon – Breakfast at Piffany’s” at Underbelly’s Circus Hub on the Meadows from the 14th to the 29th August at 10.40pm. For more information and tickets, click here.