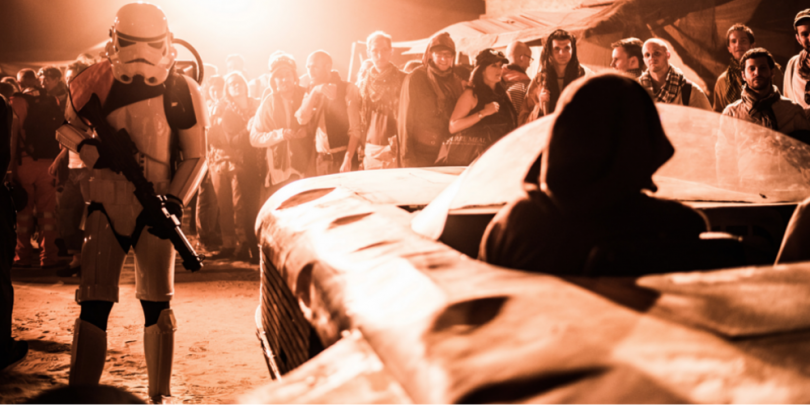 All summer long the Alliance has been extracting rebels from Earth to a galaxy far, far away as part of Secret Cinema’s latest extravaganza. It truly is a must-see event, you can read our full review of the “show” by clicking here.  Here’s why you shouldn’t miss the event of the summer:

You’re in Star Wars! That’s enough reason in itself but we have another four just in case you’re not convinced yet…

Ever wanted to experience cinema in a new way? Secret Cinema has you covered, with this being their largest event to date with 300 outfits, hundreds of actors to match and all set inside a 18 acre location which was used to filmed Avengers: Age of Ultron last year.

3) Experience watching The Empire Strikes Back with other fans.

If you’re like me and never had the opportunity to watch the original trilogy films with a large amount of other people in a theatre, it’s an experience that shouldn’t be missed. There’s something unique and special about watching a fan-favourite film with fellow enthusiasts, you’ll collectively be cringing when Luke an Leia start to flirt then cheering for Luke in the climactic fight against Vader.

4) The unique memories that will be created on the night.

Similar to a sandbox video game, you’ll come out with plenty of unique stories that you couldn’t reenact if you tried. For example when me and my fellow comrades were imprisoned by the empire, we were then freed by a friendly force who promised us the disguise of a stormtropper uniform. Another one of these moments is the time we used a Jawa’s tactics against him and went all stealth to “borrow” a part for our friend, Chewie.

5) Star Wars: The Force Awakens unleashes in December, what better way to get you in the mood!

The highly anticipated seventh chapter in the series is a mere few months away, with booking set to open next month, what better way to get re-educated on the franchise then exploring the surroundings yourself. Interacting with the characters that we’ve all grown up to love followed by watching the arguably best film of the franchise so far!

Secret Cinema presents The Empire Strikes Back is on until the 27th September 2015. For more information including tickets, click here.