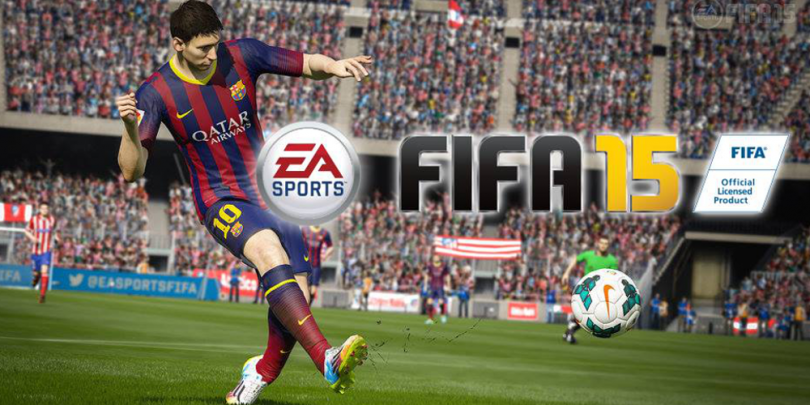 From the start, Fifa 15 looks as though it is very much the same and the observation wouldn’t be wrong but this is slightly redeemed by some small gameplay features that gives the franchise a new layer of paint.

One of the highlights of Fifa 15 is the exceptional way of making the gamer feel the sense of occasion you get watching a real match. Cosmetic changes to the pitch allow you to feel as though you have endured a real game, along with player intelligence, we see players reacting to their team mates missing chances or battling feuds between two rivals but , unfortunately this has its own problems, as two players would come together after a challenge we would see an interesting animation then the players would return instantly to their jarring robotic selves which really took me out of the realism. This is just a minor hiccup as added ball physics new set piece tactics improved dribbling and the ability to watch a goal-line clearance such as a on TV made me gape in utter coolness as Hugo Lloris scooped the ball of the line to my dismay, but even though this is an exciting new addition I cant help but feel as though nothing has actually changed that isn’t gameplay related, Fifa 15 essentially feels like more of the same just more polished than ever before which isn’t necessarily a bad thing but does leave space for something new to be desired.

With a variety of leagues available I can’t help but feel that extra attention is given to the premier league with every stadium available in the game, it’s fantastic if you’re a fan of English football, but unfortunately this care and attention isn’t given to the lesser teams of other nations. Ultimate Team has a few new features with the ability to loan superstars from your catalogue, letting you use otherwise very expensive players in your team and an infinite amount of contract cards can be kept, allowing you to manage you team easier.

Subtle visual improvements add up to a drastic revamp although some players do look overly musculus in comparison to their real life counterparts, Ricky Lambert of Liverpool is a prime example. Goalkeeping animations have drastically changed the way you shoot and goalkeepers finally feel like a challenge instead of a certain goal every time you are through 1v1, and this helps reward creativity in shooting, resulting in some fantastic goals that look like they have been taken off the television screen.

The previous EA server problems with frame rate drops online appear to of been ironed out in this latest addition to the franchise.