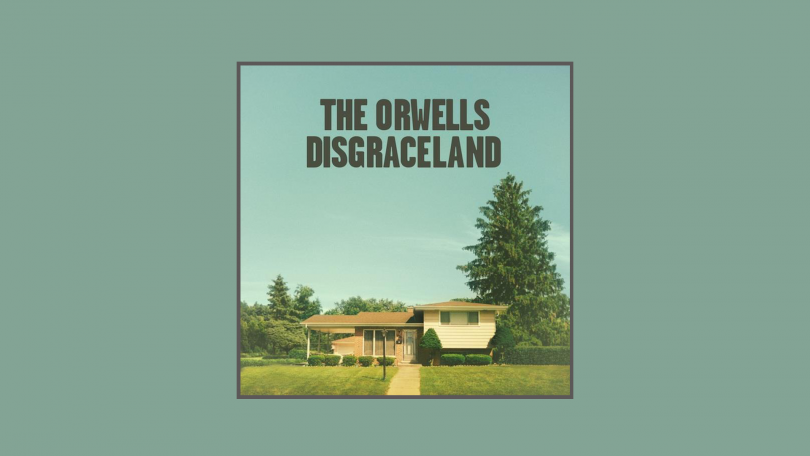 Living in Chicago writing for a UK based media outlet there are very few times where what’s happening near me is as relevant as it is over seas. The Orwells are a Garage Rock band from Elmhurst, Illinois (a town that is right near where I live.) Over the last few years it’s been really great to see a band so local to me grow to such popularity: they played Lollapalooza last year, an expansive UK tour featuring a performance on Jools Holland, opened for the Arctic Monkeys for a few dates earlier this year, got their hit single “Who Needs You” to play on radio stations all over the country, and of course the renowned performance on Letterman last January. Even with this heighten in fame The Orwells have never shed their Illinois connections. If you were to preorder this album you were given the option to receive an Orwells version of a Chicago Bulls jersey and the album cover of this album, I can only guess, is one of the band member’s houses considering every house in Elmhurst looks like this. This album has been publicized for almost a year due to the band releasing most of these songs one by one. With every song released the anticipation built and after months of waiting it is finally here in its final form.

The first song on this album is “Southern Comfort”. Honestly it’s not my favorite song on the album and is kind of a weak opening. The idea of having a song that doesn’t even have a chorus of actual lyrics may have worked for “Mallrats (La La La)” their first big single off their debut Remember When because of the punk, youth aesthetic but with this song it just falls flat compared to all the other song on this album. The verses tell of singer, Mario Cuomo, escapades with women; something he is known for. This song just reminds me of the stories my female friends have told me about hang out with Mario.

“The Righteous One” might be my favorite Orwells song. A few weeks ago I learned that there was an original recording of this song that was released back in 2011. I listened to it and after being accustomed to the new version, I was quite surprised. It really shows how far The Orwells have come in a short amount of time. The songs on this album were recorded in major studios all over the world. This song was recorded in Konk Studios in London (The Kinks, Elvis Costello, and Arctic Monkeys have all recorded there.) From the band’s basement to a major studio half way across the world it’s an interesting comparison. What I really love about this song is the massive waves of reverb that are used which make it feel as if it’s from one of those West Coast Garage Rock bands that they idolize so much. That along side the infectious bass line and the 7x repetition of “double” in “double dare” make it a song that just sticks in my mind for days after.

“Dirty Sheets” was first released at the end of last year, in the midst of releasing one song at a time. At the time I just thought that this was “Just another solid Orwells song” but since then I’ve really seen it as one of the best on the album. The opening line “From the east coast to the west/ we ain’t the worst we ain’t the best” may be simple but its just such a great description to the down to earth, honest mentality The Orwells have. The story of youthful romance is great and I love how the song builds to such an intense level.

“Bathroom Tile Blues” shows a new style for The Orwells, one that is more inspired by Glam Rock. It feels like the kind of song that would be played at a school dance back when real bands would play dances. This was one of the few songs that weren’t previously released and when hearing it I was genuinely surprised. Its just another side to the D20 die of styles The Orwells can dominate.

“Gotta Get Down” was released two weeks before the albums official release accompanied by a compilation of GIF’s from various late 20th century youth culture films such as Fast Times at Ridgemont High and Dazed and Confused. This song is very Pixies-esque and features another line from the murder/suicide theme that the Orwells like to uses so much “My daddy’s got a 12 gauge/ I hope I don’t find it.”

“Let It Burn” is the only other song besides “Southern Comfort” that I really don’t like that much. It’s an okay song, it’s got a good riff and a lot of energy but it lacks all personality that an Orwells song usually has. It sounds like a generic Alternative radio hit that any bad could have written. Honestly it feels like it was put on his album just to be the successor to “Who Needs You” on the charts.

“Who Needs You” is the main single off this album. From the time I first heard this song last summer I knew this was one of the biggest songs for The Orwells. It was the first song released in this higher production quality and its lyrical content was moving away from teenage romance and into something more substantial. It was crazy hearing this song on the radio after listening to it for months on my own. While I’ve heard it so many times over the last year its still a great song.

I can only imagine that “Norman” is a reference to the film Norman and the Killer or Norman Bates from the acclaimed Hitchcock film Psycho. The theme of murder is probably the most common one in The Orwells’ songs (its pretty much half of what makes up Remember When) that being said this song takes a completely different angle with the theme by making it as a sort of homage to horror films. Lines such as “You’re not gonna make it to the sequel” break the forth wall and make you wonder if the stories of death they’ve told before are true or not. Surprisingly the lyrics only last for half the song leaving the other two minutes for the band to jam and use a lot of distortion techniques.

“Always N Forever” is a song that has been released twice but never digitally. It was first released last fall on a split single with the California Skate Punk band FIDLAR and as the B-side to Righteous Ones for their Record Store Day release (I own both of these releases.) Over the last six months of listening to this song I’ve really enjoyed it; the guitar riff is one of my favorites from The Orwells and lyrically it is the most suburban song on the album. The version on this album is a completely different one from the one previously released. The vocals are clearer and the guitars are more polished. This new version actually helps me enjoy this song more because it feels fresh even after hearing the same lyrics and melodies for the last six months. The only thing I’m not so into is the engine sound that appears multiple times throughout the track. It sounds more like a lawn mower than a car, leaving it rather weak paired with the roughness of The Orwells sound.

“Blood Bubbles” was also rerecorded. First released on the EP Other Voices from last year, I felt that it was necessary to rerecord it. With a similar level of attention brought to it as some of the newer songs it actually can hold its own against them.

The final track “North Ave” is another Glam Rock inspired track that reminds me of the Smith Western (another Chicago band who has influenced them a lot.) Lyrically it is one of the best songs from The Orwells in the fact of how detailed it is. It’s a great closing track.

Overall I really enjoyed this album. The Orwells sure know how to write a hook and none of these songs seemed like filler, every track lets them try something new. Disgraceland has launched The Orwells to further attention and I am very interested in seeing what the next few months of their career hold.