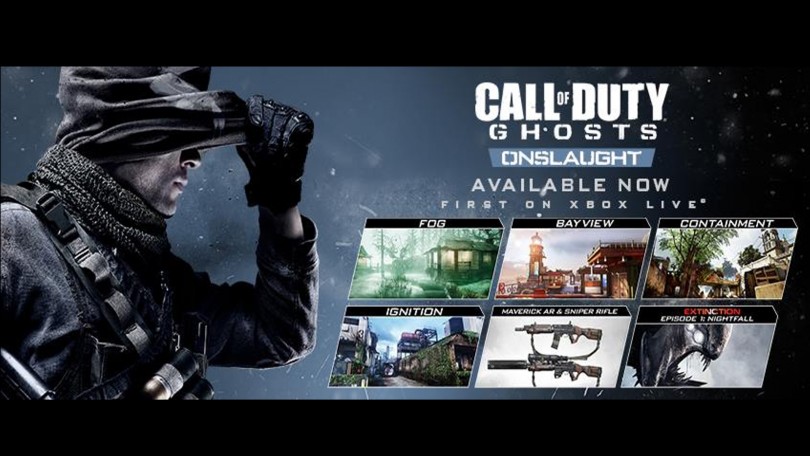 Ignition – A reimagining of a MW2 fan favourite scrapyard turning it into a missile-launching facility with some new flanking routes and shot spots. This close quarters map plays very well giving for some up-close combat. The new route that has been included is a tunnel system accessible from both spawn points and creates just another way round the map and it seems very effective from what I’ve played. Once cool feature of this map is in the B flag room and this is a huge jet engine that can be turned on and off, this jet of fire both smokes out the room and kills those unfortunate enough to get in its way. The dynamic event on this map is obtainable through completing field orders, this even triggers the underground part of the map to be engulfed by flames killing anyone who is in there at the time. Containment – Looking like a rundown town in South America this map revolves around the bridge in the centre, this seems to be where a lot of the gun fights take place. This is an interesting map. I would say it is a short-medium map. This map has some a good few ways to each side of the map, underneath the bridge is a bit of a ravine which seperates both sides of the map, there are multiple routes to get out once in this ravine which is a good point but can also mean a lot of blind spots and unless properly covered could result in being annihilated by the enemy.  The event for this map involves the radioactive truck on the bridge. Not only does it scramble your mini-map while near once field orders are called it the truck along with the bridge is blown up along with anyone on it. Fog – With a horror vibe this map is probably my favourite of this DLC. It goes well against the normal kind of maps that are normally created adding something different into the mix. Set in a swampy area with one main house, a cave and some shacks this close to mid range map is one I always vote for in game lobby’s. keeping with the “dynamics” of ghosts this map contains possibly the best field order reward of the DLC, the ability to be Michael Myers, the axe wielding maniac from the Halloween films. When you open this care pack you transform into him and the theme from Halloween plays creating a ere feel to the game with the enemies knowing that lurking in the shadows waiting to pounce and strike them down. Although this is only just a re-skinned maniac I still really like it, and it seems very popular with everyone still going for this in games. Bayview – The final multiplayer map of this DLC is bayview, set on a Californian costal town this map is the most colourful out of the 4. with a lot of combat based around both the pier and through buildings this close quarters map is a nice addition with this DLC. The main reason I like this map is the moving tram that goes back and forth from both spawns, this has created some great moments of using it to get to places quickly or even straight off the start of a game where the whole team can pile in and rush the enemies straight away. One problem with this map though is the lighthouse with its elevated position which seems like fan service for trick shoters wanting an easy place to ladder-stall or 360. I have gone into games of search and destroy or search and rescue where teams would just been jumping off one at a time from this location trying to hit clips which stalls the game time and is just annoying. Extinction – Onslaught has brought a new extinction map/ mission. Set in an abandoned snowy military base which has become infested with aliens and a huge boss alien known as the breeder. This mission is generally the same with point of contact but with a different style ending. This expansion has seen the addition of new guns, a new way of finding guns using lockers to obtain these guns and this has also given extinction a storyline. Through intel scattered about the map that tells you about what has happened and some bits here and there it has certainly gripped me in the same way as the zombies storyline of black ops 2 did. Without this storyline I feel extinction would have become stale and just something like modern warfare 3’s survival game mode, but the story has saved this and intrigued me, I am now anticipating the next instalment now. http://www.youtube.com/watch?v=6AMgmCx7jFg

For a chance to win a £5 Xpress Games voucher, simply head to our Facebook page and tell us what your favourite Call Of Duty game is!