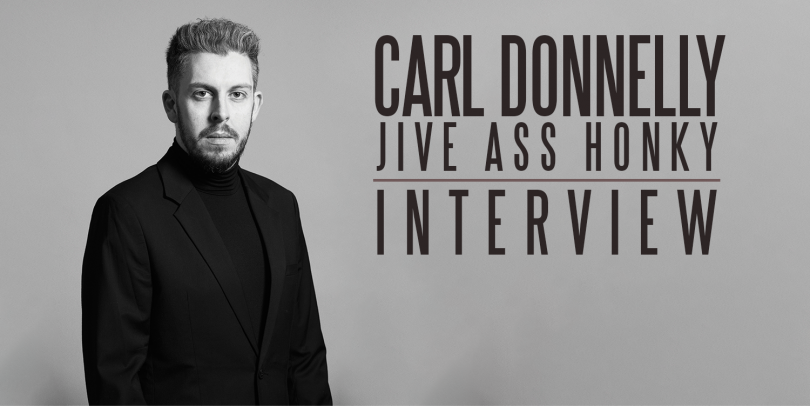 Fringe regular and podcast extraordinaire, we caught up with Carl Donnelly to talk about his upcoming show, “Jive Ass Donky”,

CM: Thanks for joining us today, not long ’till the Fringe now, how’s life shaping up towards it?

CD: Life is shaping up nicely coming into this Fringe. I’m not stressing at all (which could be a bad sign) but the show has come together really organically since the start of the year so I’ve not had any major panics that I’m showing up with an hour that has been rushed.

CM: I think it’s safe to say you are a veteran of the Fringe, what draws you to the festival?

CD: I think this might be the first time I’ve been referred to as a fringe veteran. I like it. I think I’m drawn to it because of the excitement of being in a place surrounded by so much creativity with the added challenge of doing something that is worthy of being there. It’s like the end of year exams for comedians to see how hard they’ve been working that year.

CM: You’re a keen podcaster with Chris Martin, reaching nearly 130 episodes to date which is some commitment! What do you love about doing this?

CD: In truth, me and Chris would have the conversations that make up our podcast even if we weren’t recording them. That’s essentially why we started doing it. We would sit around and talk nonsense and make each other laugh when one day we thought we should record it and put it out there to see if anyone shared our sense of humour. We’ve now got a great community of listeners who have come on board over the years. Recording it is definitely one of the highlights of each week as it’s probably when I laugh the most. Chris has this weird ability to say something so silly that it doesn’t sink in for a minute. When it does though, I just lose it and can’t talk until I’ve recovered. I think that’s what our listeners like. They can tell we’re actual mates who make each other laugh.

CN: You’re doing live podcasts actually at the Fringe* which people can come along to, is there much difference recording in front of a live audience?

CD: The main different is that we can take questions from the audience live rather than have me or Chris badly read them out as we normally do. It’s a bit of a tightrope doing live podcasts as you have to make it fun for those in the room while still making it interesting for those at home. We’ve done ones before where we got carried away with the live audience and on listening back it can feel a bit exclusive for the listeners. We’ve learned our lessons though so these Edinburgh live ones will be perfect!

CM: Any tips for people who want to create podcasts like yourselves?

CD: Just make sure you do it with the right people. My favourite podcast is Radiolab which is an American documentary series hosted by two journalists (Jay Abumrad and Robert Krulwich) which has fascinating subject matter but ultimately wouldn’t work if it wasn’t for the dynamic between the two. They genuinely sound like they enjoy discussing these things with each other and there are moments when they surprise the other with bits of information that make it what it is.

CM: What can we expect from your new show?

CD: I think it is my most honest show to date. By that I’m not saying that my previous shows weren’t but this one covers a few traits of mine that I’ve avoided talking about before. In it I discuss the depression and anxiety I’ve suffered from in the past. It sounds like a much darker show on paper than it actually is though. I think I’ve managed to write a very silly hour that just so happens to cover serious topics which was my intention from the start. I think anxiety and depression are talked about in a way that adds to the stigma. I thought if I can share a bunch of silly stories with that as the backdrop then it might raise a little bit of awareness but still totally be the style of comedy I do.

CM: Where’s your favourite place to go in Edinburgh when you’re not performing your show?

CD: Duddingston Loch. It’s the place I go during the fringe to get away from the mayhem. It’s only a half an hour walk from the old town but feels like you’re a million miles away. I’ve done some of my best thinking while sitting there looking at the loch.

One of my all-time great Edinburgh nights was when in 2008, me, Chris Martin, Benny Boot and Matt Rudge drunkenly hatched the plan to pretend to be an impro group. We showed up to a late show Matt was billed to do and he explained there had been a mix up and he wasn’t doing stand up but doing his impro show instead. We claimed to be called ‘The Strokeydokes’ and ended up closing the show despite a) not existing and b) having never done impro before. It was some of the worst impro that has ever happened and involved a lot of drunken nudity. It was one of those things that can happen in Edinburgh. A drunken idea becomes reality!

Carl Donnelly will perform his stand-up show Jive Ass Honky at the Pleasance Upstairs as part of the Edinburgh Festival Fringe from 5th to the 30th August (not 17th) at 8.30pm. More info and tickets available here: www.wearelivecomedy.com