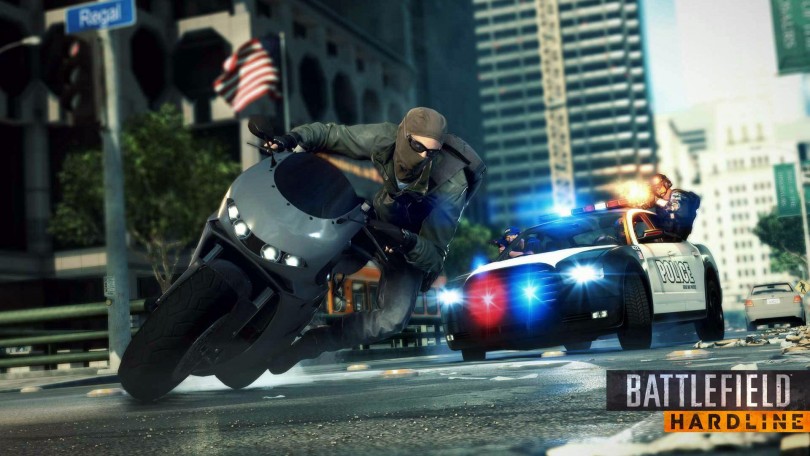 Speed is the name of the game. Actually, it’s Hardline, but speed is the biggest takeaway from the open-beta that was held last week, across nearly every platform. The open-beta was a huge success, racking in over 6 million players worldwide. Though we were only given a peek at the content packaged with the game, a few things really stood out.

First off, it’s the fastest Battlefield to date. With each of the three maps and modes playable in the beta, it’s apparent they were designed to pace the flow of each round. Conquest Large made it’s 64-player return alongside, Heist and Hotwire, Visceral’s brand new, cops versus robbers modes. Heist is essentially what made Payday 2 great. It’s no carbon copy, but the inspiration is clear. The mode puts players in either the role of the cop or the bank robber. On team police, players are tasked with intercepting criminals and stopping them before they loot the vault. On the criminal side of things, Heist mode shines. Running through a grand scale bank robbery gone wrong, not knowing what’s around the conner is adrenaline pumping. Hardline’s implementation of sweet new gadgets in Heist mode are impressive. Using a zip-line to traverse the map is great, and really put me in the mindset of a adventurous criminal. To assist the cops in prosecuting the perpetrators, gadgets such as tasers and riot shields are used to gain the upper hand.

Hotwire is basically Conquest on the go. Capture points when playing Conquest, are now vehicles that are taken by driving at high speeds throughout the map. It’s arguably the fastest mode Battlefield fans have ever seen. With the removal of jets, tanks and other military-grade artillery seen in previous installments, Hardline is a smaller, gritty take on ground warfare. Action is in-your-face quicker, maps are tighter, and weapons, gadgets and vehicles insure you’re never too far away from the fight. Hotwire is a smart mode that offers energetic activity everywhere it drifts.

Hardline handles it’s classes extremely well. Both sides of the law have separate loadout options, meaning each side you play on is equipped with a unique arsenal. This is a smart decision since it logically doesn’t make sense for a law enforcement official to run around with a gang-style oozie, or for a criminal to posses a police-class sniper. The game has four classes to choose from; Operator, Mechanic, Enforcer and last but certainly not least, Professional. After a match, players switch sides and are given the opportunity to purchase guns with an in-game currency system that blows away previous Battlefields.

Money is received by doing nearly anything and everything in the game. Shoot an enemy in the face – get some cash, blow up a car – get some cash, capture a marked point – get some cash; simple as that. This system is leaps and bounds better than what Battlefield players are used to. The in-game currency applies to either side of the law, allowing the player to choose where they put their money. I for one, put most of the money I earned during the beta towards the Operator and Enforcer class.

Leveling up is nowhere near as tedious and grindy as it felt in Battlefield 4. After only dumping a few hours into the beta, I quickly found myself passing level 30 with ease. In Hardline, leveling up really feels like it matters, but at the same time doesn’t punish lower-level players like in Destiny for example. The currency system helps balance what is unlocked by leveling up and what can be purchased with money extremely well. In many ways it’s the glue that holds the game’s cops versus criminals premise together.

For the most part, gameplay is solid. Shooting is satisfying, explosions pack a punch and operating vehicles is fast paced. Though Hardline may only be in beta, it’s the same engine that chugged along in Battlefield 4. When Battlefield 4 launched back in 2013, the multiplayer side of the game was hardly playable for many, myself included. Hardline runs much better, yet is still frequently choppy and clunky due to sharing the same engine.

Visceral has done a fantastic job getting the Frostbite engine in the best shape it can be. Yet even with all their hard work, it’s the engine that’s the biggest factor holding back Hardline. Visceral gets a lot right, mainly with pace of gameplay, map design and mode premise, all of which encourage quick and satisfying firefights. Small mechanics such as hit markers, are far more fine-tuned and responsive, which really helped me improve my shooting.

Bringing it back to the engine, the problems are more than noticeable with major inconveniences that tamper with actual gameplay. Constant jitters, clunky car handling, bland and generally weak textures are some of Frostbite’s biggest downfalls. These problems are much more recognizable, for I rarely question AAA game’s engines, yet it’s something I found myself constantly doing while playing Hardline.

The inclusion of Hardline’s Commander mode, Hacker, is a nice feature, but one I found myself ignoring entirely. It didn’t fit how I wanted to play the game and greatly slowed the pace. It’s a bit more grounded than Commander and doesn’t put players in the role of calling missile strikes, instead, players can tamper with security cameras and other various mechanics that would exist in this scenario.

Last and certainly least, Battlelog is still an embarrassment and an atrocity that should’ve been removed long ago. I’m not punishing the game for the inclusion of Battlelog, because it’s easy to look over and rarely gets in the way of the game. But to be honest, knowing it’s there just frustrates me.

Hardline remains one of my most highly anticipated games of this year, and holds true to a lot of its promises. It’s proven that Visceral knows what they’re doing and they understand what makes Battlefield great. From what we’ve seen the maps are mode-purposeful, hinting nothing but greatness when the full game launches. I can’t wait to jump into the story mode and see with the rest of multiplayer brings. Whether it’s worth dishing out another $60 for what may feel like DLC for many, it’s all dependent on how the campaign is received. Although a bumpy ride, literally, Hardline’s beta did what betas are supposed to do, it sold me on the final product. And if you ask me that’s a success.

Battlefield Hardline is released on March 20th and you can pre-order the game by clicking here.