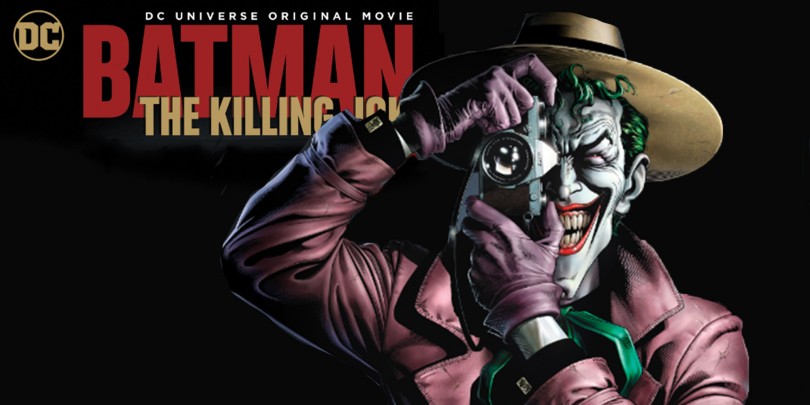 We should start this review by explaining my preexisting love for the original material. ‘THE KILLING JOKE’ was the first graphic novel I picked up a few years ago, and set me on a beautiful journey into geekdom. It remains to this day one of my favourite and most influential works of fiction. It pushes two of the most beloved characters in the comic genre to terrifying limits, and the imagery throughout is simply exquisite. No pressure on the film then. I shall keep my thoughts spoiler free and brief, as I really do hope more of you pick up the incredible graphic novel. For now, let’s talk about the film adaptation.

A year or so ago, I stumbled across a fan made audio adaptation on YouTube – it was accompanied by visuals that were simply frames from the comic. The audio work, and I mean from narration to sound effects, were spot on. I cannot remember the source of the production, but look it up, it is perfect. I bring this up for two reasons. The audio adaptation shows just how beautiful and terrifying the dialogue in The Killing Joke can be relayed, and when combined with the imagery, it can lead to extraordinary results. Indeed, it only got me more enthused for a project I was already anticipating highly. My worry, however, was that this frame for frame audio production was less than 30 minutes in length. To hear the filmmakers were bringing the comic to the big screen in the form of a feature length animation worried me: “Where would they find the extra 40+ minutes?”.

Unfortunately, this is where the film falls flat. It’s not a secret that for this feature length adaptation, we would be told more of Batgirls story. I have no problem with this, in fact I encourage filmmakers to add existing material with their own ideas if it supports the concept and content. However, and again I’ll try and avoid spoilers, I was left somewhat frustrated with two key points. Firstly, as I mentioned the expansion of Barbra Gordon’s story is a beautiful idea. She can be the gateway to the human side of Batman. And that’s what was presented to us, but in a slightly offensive manner. For all the good intentions for the character, of which there are many, BatGirl is nothing more than a sexualised side character that serves the story no purpose other than to…well, you’ll see.

Perhaps my frustration here was pushed over the edge by my second thought process. The entire concept of the graphic novel is based off the idea that The Joker and Batman are two sides of the same coin. I still get chills when remember reading the line ‘you’re one bad day away from being me’ from Joker. The grit and dark tone make this story unlike any other, and I suppose I just wanted more of that, and less of prologue that only delays the greatest element of this magnificent story: The Joker. And he really is the greatest part of the original masterpiece. We see The Joker at his most formidable. He isn’t killing people, he breaks them mentally. It’s something that set the foundation for a joker that my generation is now accustom to. For this to be pulled off in a feature length, one to be seen by millions and has the added pressure of a preexisting die hard fan base, Mark Hamill had a lot to live up to in bringing this infamous rendition to life. And boy does he do it some justice. Where other voice actors would overstate some of the insane lines, Hamill provides rational to the dark ideologies of this Joker. It really is a terrifying performance, and one that NEEDS to be talked about when debating who is the greatest Joker of all time.

Overall it is a faithful adaptation where it can be, with Conroy and Hamill proving they were the ONLY choice in bringing this challenging story to life. A little disappointing in the first 20 minutes or so, but when the familiar territory of the graphic novel begins to unfold on the screen, boy does it come to life. A valuable addition to the blu Ray collection

Batman: The Killing Joke is released on DVD, Digital HD and BluRay on the 8th August 2016. Click here to pre-order with an exclusive Joker figurine!