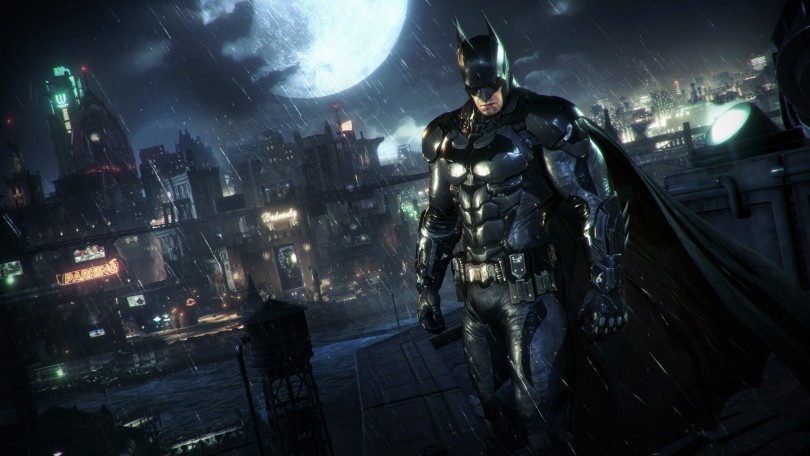 Batman is back in his final entry into the Rocksteady Arkham trilogy. With their first title on the new generation of consoles, does it par up to their impressive track record or does it fall short?

Gotham has been shocked with the threat of Scarecrow’s chemical weapons, leaving the city rendered empty, bar the criminals, police and the caped crusader. The narrative offers a familiar, yet unique set of events. Expect the twists and turns of an Arkham game with some very impressive set pieces, surprises and questioning of character morals. The way the events unfold after the final story mission of the game are different and slightly disappointing, especially in the way they are achieved, but they do leave you wanting more.

The place where the Arkham Knight really stands out was in it’s side-storylines, especially Two-Face’s, the Penguin’s and the Riddler’s, the latter of which I would happily pay for as a standalone-downloadable title on the PSN/XBL store. They offer the set-up of what we’re used to upon the previous titles in the series, but bolder than before. This is combated with some very weak side-storylines, but you do get to pick and choose the ones you wish to follow to an extent.

The biggest addition, which has been very will publicised, has been the Batmobile – your new way to explore Gotham. Cruising around the streets gives you a new perspective of the city in it’s darkest moments, rather than flying through the night sky, which is still as enjoyable as ever. The biggest criticism is the excessive Batmobile tank missions, they feel forced into the main campaign – they would of slotted in nicely into just a side mission, which they actually do provide.

We did encounter one large glitch where we kept respawning underneath the map, with no way out, to fix this we had to restart the whole system. Some judders in certain sections, especially on exit from the Riddler races, made it clear they were in-game loading sections however this is just a tiny gripe with an astonishing game. apart from these two problems, the game appeared to be very polished on this platform (PS4).

The open world aspect feels genuine, the way that you’ll be run over by some crooks if you’re standing in the street, who quickly hurry away when you call in your Batmobile to the missions you’ll just be happening to drive past from, making for an hour long de-tour from your original journey. This is truly the best experience to put you in Batman’s cowl.