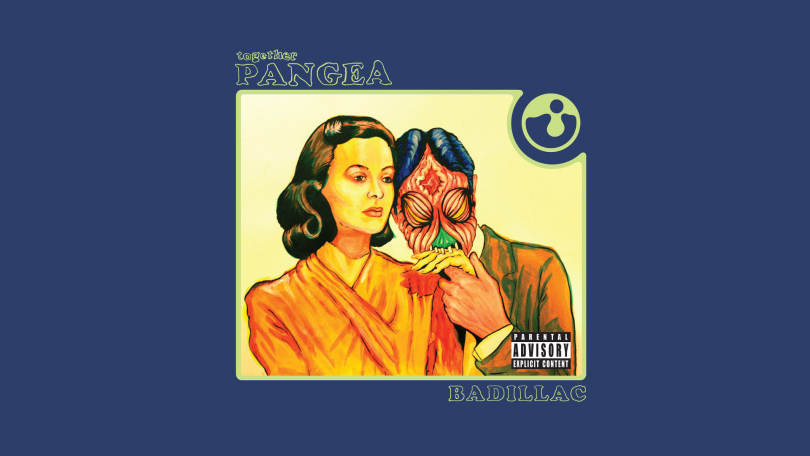 Together Pangea, formally known as Pangea, is a California Surf Punk band that just released their highly anticipated album, Badillac. Together Pangea have been one of the gruffest punk bands to come out of this California, Surf, Punk, Garage, Lo-fi scene that has grown exponentially over the last few years. Their last release was back in 2011; a very Lo-fi, high energy Punk album entitled Living Dummy. Badillac has been long overdue and in those last three years they have been able to do amazing things with their sound.

The differences between Living Dummy and Badillac are immense. Living Dummy was very ruff, filled with quick, up beat songs. It’s as if they were racing to make the fastest album (the longest song on the album is at 3:07). The recording quality was very low, really loosing a lot of the power that the guitars and drums could have at times. Even with these issues I still really enjoyed Living Dummy, 14 tracks each as fun and catchy as the last. Living Dummy is full of carefree, fun tracks and that’s what made it great. So when I heard Badillac I was quite surprised by its differences. Now on a bigger label, Together Pangea has the opportunities and budget to capture that bigger sound. The first time I was exposed to this new sound was on their single “Snakedog” (surprisingly it is not one of the tracks on Badillac) it was released last August. Just from the clarity of the first few chords I was blown away by the progress in their sound. The energy of “Snakedog” also was unlike any of their other songs. These characteristics are portrayed just as well on Badillac. One of the other major differences between these two albums is that Badillac takes a much darker turn. Badillac is a very dark, angsty album. All of the songs, aside from “River”, are dismal and abrasive leaving the fun, upbeat songs of their previous release in the dust; it’s as if they woke up the next morning and began to realize the consequences and realities of their carefree lifestyle.

All of this said I wouldn’t have Badillac any other way; I love every song on it. Together Pangea’s sound is just so big for such as small band, they don’t hold anything back. Badillac has been one of the loudest records I’ve heard in a while.

On the opening track, “Alive” the first things you hear are distortion and a very heavy Black Sabbath-esque riff that quickly switches into a double time punk riff. These two ideas keep getting thrown back and forth until you are completely lost in the organized chaos that is Badillac.

“Catman” is just one giant crescendo that starts loud and gets to such a boisterous volume that you almost can’t handle it. The track doesn’t end without a fight, kicking and screaming its way out.

“Depress” is another great track that portrays that organized chaos. Instrumentation just crashes into each other and the chorus “depress/suppress” is repeated in a way that reminds me of Nirvana’s “Stay Away”.

“Badillac” trades in that hardcore punk sound for two and a half minutes, for a more folk oriented track. That being said this song rocks just as hard as any of the others on the album. It switches it up just incase you were getting bored, keeping you even more engaged. In fact songs such as “River” and “No Way Out” help diversify this album as well. As I said before “River” is one of the more upbeat tracks and “No Way Out” helps prove that Together Pangea can do soft just as well as loud.

I do have to say that singer William Keegan’s voice is definitely an acquired taste but if you listen to a lot of different punk bands you shouldn’t have much of an issue. Aside from that I would recommend this album to anyone who loves rock music. Especially if you’re the kind of person who has Vinewood Boulevard Radio on constantly when you’re playing GTA V seeing as that is the type of music Together Pangea plays. They are also friends with and have toured with a lot of the bands on that station.

2014 has had a great start and I’m not sure if there will be an album as big as this released this year.