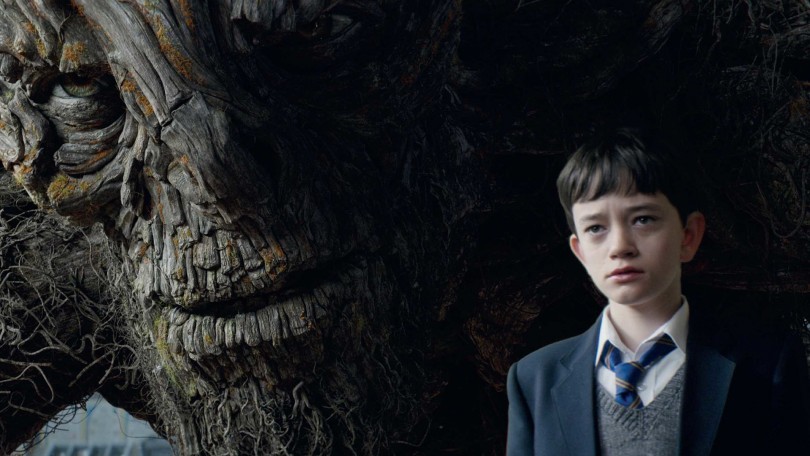 A Monster Calls is about a Monster, but to call it a Monster movie is doing it a disservice as it is so much more. The film revolves around a boy named Connor who is at a difficult age and facing many challenges, bullies, a horrible grandmother, a father who abandoned him suddenly returning and a mother who he loves but is suffering from a severe illness. So what does he do with this boiling pot of emotions, well he calls for a monster of course. Many films in recent memory, across genres, have played with the concept of the Monster and the good guy/bad guy dynamic (Monsters Inc, Wreck It Ralph, It Follows, Pan’s Labyrinth, etc). What makes A Monster Calls almost unique, especially amongst family films, is that by placing this huge and fantastical Monster into a narrative that is so incredibly honest and human, that monster suddenly becomes a metaphorical and psychological representation of themes and ideas that would otherwise be almost impossible to visualise in a straightforward social realist drama. Pan’s Labyrinth (2006, Guillermo Del Toro) was mentioned earlier, and it’s not too ostentatious to say that A Monster Calls is the English language equivalent to Labyrinth, it takes the deeply ingrained folklore and fairy tales of our combined cultural upbringings and weaves them into a reality we can understand. And in doing so blurs the line between what is story and what is truth, maybe even they’re the same thing.

Even when we move away from the deeper analysis of the film and look at it purely as an audience member, it is still a film full of heart, life and beauty. The film it most reminded me of is one of my favourite films of all time, The Iron Giant, not only like Monster calls was it a film that tried something different in a genre that had become formulaic, but it also explored the idea of a misunderstood monster who although visually very un-human in the end comes to teach us more about humanity than any human character could. Another similarity between the two films is their beautiful visual approaches and stylish cinematography, as Iron Giant uses classical Disney-style animation to tell a real world story, A Monster Calls does something very similar by seamlessly moving between tangible fairy tale watercolour animations (think ‘Tale of the Three Brothers’ from Harry Potter and The Deathly Hallows: Part 1) and the real world struggles of the main character Connor. The thread tying these two drastically different styles together and making them work is the flawlessly designed monster, he is present in both worlds of the film but doesn’t seem to fit in either world. He feels more of an omnipresent character as if his age and wisdom have moved him beyond any conception of real or fantasy, the best way to describe him would be to say that he is only truth.

The other key element of this film that is the cherry on top is it’s incredible ensemble cast, from Lewis MacDougall as Connor to Liam Neeson as the Monster everyone in this film is putting in 110%, and almost all of it is hitting its mark by plucking the audience’s heartstrings. I think of all the performance the one that really stood out for me was Toby Kebbell as Connor’s estranged father who manages, even with probably the shortest on screen time of most of the core cast, to produce a fully rounded character that has a level of emotional complexity not regularly seen in supporting roles (it’s also nice to see him out of the mo-cap suit and in front of the camera as himself). The one minor letdown for me was Sigourney Weaver as Connor’s grandmother, she felt miscast as the grumpy old biddy and for most of the film I didn’t feel I was having the same response to her as Connor does, although in the end her character did grow on me, it just felt a little too late. Overall A Monster Calls is one of the best young adult fiction adaptations put to screen in recent memory, because like The Iron Giant it understands that the best stories, however fantastical and farfetched they may be, require a truth to be told for their humanity to be revealed.

A Monster Calls takes the best ideas of classical fairy tales and gives them a modern twist that feels unlike anything you’ve seen before, it balances the tricky subject matter of the film in such a way that it is still enjoyable to watch whilst remaining true to its emotional heart. A stunning mix of visuals blend seamlessly to produce an almost dream like experience, whilst still staying grounded through the stellar performances of the entire cast, even if some characters take longer to connect with than other it doesn’t distract from what is still a brutally honest story told in a fantastical way.