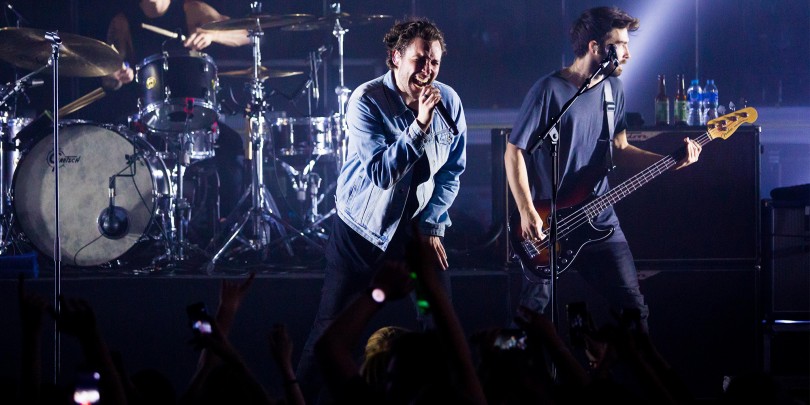 The Leas Cliff Hall in Folkestone isn’t the typical venue you’d associate with a band of You Me at Six’s stature, with them often performing at historic housings including Brixton Academy and Alexandra Palace, but it’s nice for these bands to go off the beaten-track and pay attention to those smaller venues in the often side-stepped towns.

The purpose of the tour seems to be to re-connect to the fanbase after over a year away performing live with their new album releasing early next year, with this in mind the setlist can be a tricky thing to work out. The majority of it draws from their last two albums; Sinners Never Sleep and Cavalier Youth, with a few hits from Hold Me Down. Unfortunately the debut album, Take Off Your Colours, was taken to one side for this tour.

So, onto the performance. The crowd took a while to warm to Josh Franceschi’s hidden presence, with a hood covering his face for the first few songs, but as the night grew, so did the atmosphere.

It’s a bold move to end a set with a new single, especially with the band’s back catalogue on offer, but it’s testament to the new material that they can do this, and successfully at that.

You Me At Six continue their UK tour throughout the month and the new album, Night People, is out January 13th 2017.