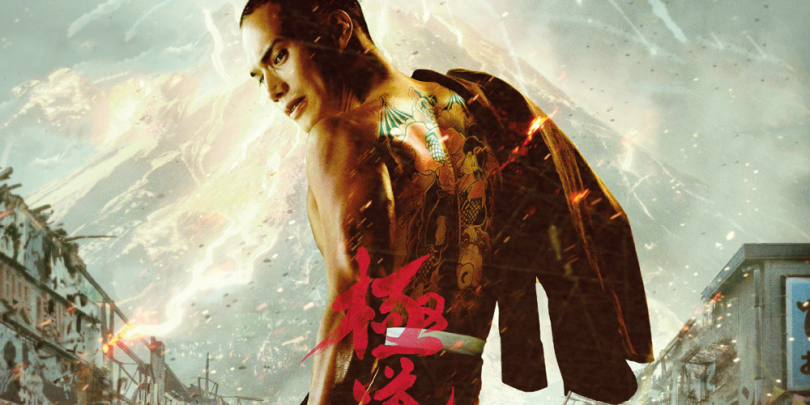 Yakuza Apocalypse is an interesting film to say the least; a premise stemming from two very differing genres, one of Japanese origin and the other of a western. The film follows Kageyama, an underling of the great Yakuza boss, Kamiura. When he is viciously killed, Kageyama is chosen by Kamiura to carry his vampire genes and with these new powers to seek vengeance for his boss.

The story of Yakuza Apocalypse is in itself a rollercoaster ride, often making me hit the pause button to contemplate what just happened. The story itself is easy enough to follow and enjoyable although it did feel it rushed over segments that if left in, would of given more context for the events. There’s a running stigma of the Yakuza series to not harm the citizens and protect them, with Yakuza Apocalypse, this is not the case although it was easy to put this to the side given it’s motion picture debut. When it comes to Kageyama and his transformation, there was a slight lack of excitement and explanation of the process.

The film progresses into weirder territory and big leaps in the narrative although this could be down the assumption of being invested in Japanese culture, for example a Guy Fawkes-esque man striding in with a child size coffin on his back who later turns out to be a vampire killer. These off-putting and “wacky” outfits often take you out of the film and the hilarity takes over.

The aesthetics of the setting, mainly set in the backstreets of a Japanese city, is a joy to view and feels right at home with the story with a similar case for music, fitting in to the fight scenes as well as the ambient ones, never feeling forced or like an odd fit.

Overall Yakuza Apocalypse meets expectations and thats’s it. The clashing of drama and bizarre characters often brings you out of the film making you often loose any further investment in the film that you’d have but if you can get over this, you’ll have a much better experience. The original idea of Yakuza is still at the heart of the film but some more context wouldn’t of gone a miss.

Yakuza Apocalypse is in cinemas now, for your local times, please visit www.yakuzaapocalypse.com.