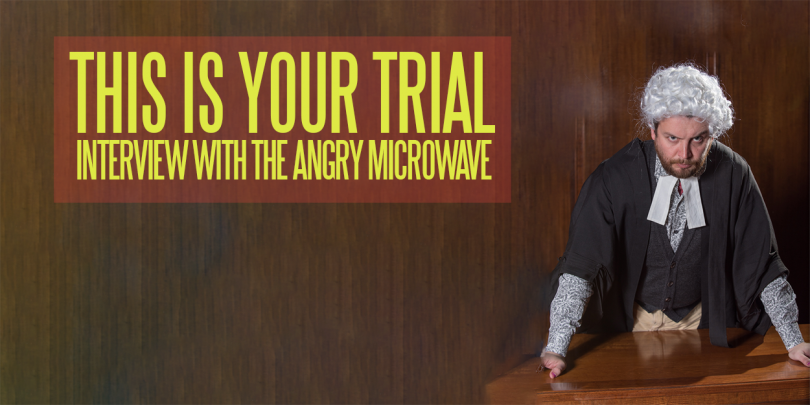 Looking for a way to place your friends in court and freely laugh at them? This is your place, this is your trial. We caught up with the mastermind behind the show, David Allison, to speak about the upcoming run at the Edinburgh Fringe 2015!

CM: Thanks for joining us today, how are you?

DA: Cold. It’s my third year of bringing thisisyourtrial to Edinburgh and quite frankly, I should’ve packed better. I am also a bag of jangling nerves. I might have drunk too much coffee. Or I might be bricking it because we’re about to do 25x Trials in a month.

CM: For people that may not know, what is “This Is Your Trial”?

DA: It’s improvised and interactive and it’s set in a court room. A cross between a comedy roast and Judge Judy. But with four top quality comedians in the roles of judge, clerk and prosecution/defence QCs. They’re all dressed up proper, wearing wigs and gowns. The audience also has a role to play. Several in fact. They’re the jury, court artist, witnesses, defendants and plaintiffs. (Which means the accuser.)

CM: What kind of cases are handed to the court?

DA: Whatever the audience decides. They basically grass each other up by filling in charge sheets and the most curious get chosen by the clerk. If it’s blindingly obvious the accused is guilty, like someone charged with being in possession of an offensive Hawaiian shirt (in a built-up area), and they are, it’s probably not going to be argued. There’s usually a lot of fraud cases. People accused of pretending to be something they’re not. We often get wives accusing husbands of being rubbish and it’s the job of one comedians to find out why and the other to try save the marriage.

CM: Each night there are two guest comedians who take up the role of the prosecution and defence, what does it take to be a good judge?

DA: The ability to carry a wig, with absolute swagger and assurity. Just like in the proper courts, being noble, wise and fair is not that essential. The judge always has very able assistance from their clerk too, to fill in the gaps of missing legal knowledge and process.

CM: Such names as Al Murray and Marcus Brigstocke are regulars at the show, who can we expect this year?

CM: Who has been your favourite guest comedian on the show?

DA: How could I answer that? I’ve been so spoiled by the talent that has come to court, worn the wigs and gowns and had so much fun. They always say they do and that is why they keep coming back. We’ve recently had Rufus Hound do a couple of shows in London which was very special. I suppose I’ve a little soft spot for Mark Dolan. We have a personal history that started when I gave him his first spot on TV many many years ago when I produced a late night talent show he went on. Completing the full circle of his appearances in my live show has a certain romance in it to me. Tim Fitzhigham must be my absolute favourite though. He has been the judge for so many. It’s really sad he cannot join us this August. Miss you Tim!

DA: In my first year taking thisisyourtrial to Edinburgh I had a private booking with a small Edinburgh company who make underpants. It was called The Bawbags Trial. Maybe this fringe experience covers all bases. It had all the ingredients. The court room was set up in Bob Slayer’s bookshop. Bob was involved, with Barry Ferns, Trevor Lock and Tony Law…as guest Judge! I’d spent ages preparing a kind of script, with evidence and arguments set up for the comedians. It was an early version of the show/format that was less improvised. Until Tony rocked up. Late. Drunk. It didn’t matter. He was hilarious. The Bawbags people loved it. All my preparation went out the window. I was kind of defeated by the mayhem he brought but also triumphant in the new direction he took the show.

You can see “This Is Your Trial”at the Assembly George Square Theatre from the 5th to 30th (not 17th) at 11:30pm. Click here for tickets and for more information including line-ups, follow @thisisyourtrial.