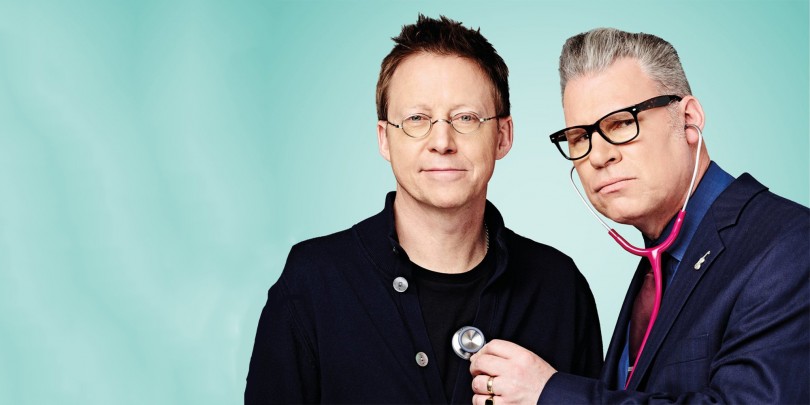 Reviewed on 06/12/15 at the Nuffield Theatre, Southampton.

The Movie Doctors are Simon Mayo and Mark Kermode, here to diagnose all your film aches and pains.

The show is segmented into different “clinics”, as per their book. The majority of the sections are a joint effort between Kermode and Mayo but there’s also sections in which they present solo, this is where the show feels unbalanced. While Kermode is fascinating to watch talk about film, Mayo slightly lacks and feels forced however the success lays in those tiny moments if interaction between the two.

There’s something special about being in a room with people who share the same passion for film as you do, something we similarly experienced at this year’s Secret Cinema. Laughing at obscure film references that the wider audience wouldn’t understand creates a special bond and an atmosphere that’s a pleasure to be in, no matter what’s going on stage!

From seeing the first incarnation of the show back in March 2014, it’s been amazing to show the concept develop and snowball into what it currently is. The only thing that feels missing from the first outing was the audience interaction on the night with Simon running around the room to grab the patients from the audience, if this show is to tour again, it would be brilliant to see this return.

It’s evidently clear that The Movie Doctors are here to stay. There’s been a book and a stage show, now the next logical step is a phone-in radio show for patients to ring up for diagnoses!

The Movie Doctors conclude their tour on Sunday 10th November 2015 in London.