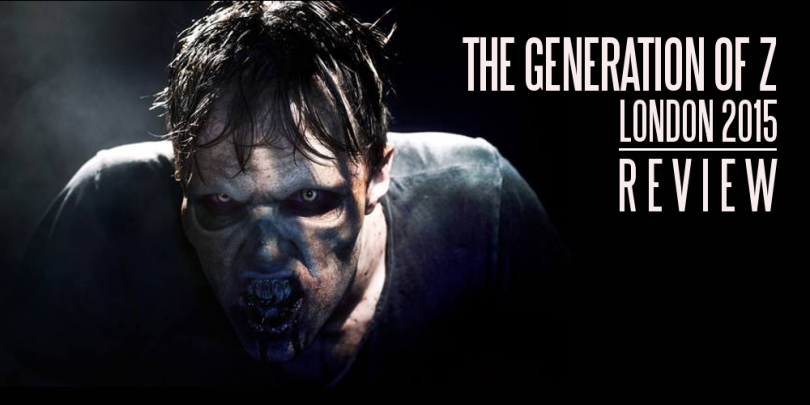 This show was reviewed in it’s final days of it’s previews on Thursday 16th April 2015, following Moose’s journey, one of four possible pathways.

After Generation of Z’s UK début at the Edinburgh Fringe last August, which for us was a five star show/experience, we were excited when it was announced that the apocalypse was coming to London.

The show has had a “re-imagining” since August with new storyline branches added on top to the core story which brings a breath of fresh air to people wanting more from the production, however, expect the same wise-cracks from the cast which still are made unique by it’s interaction with the audience.

The experience as a whole is held up on David Van Horn’s performance which is outstanding, the character Moose which he portrays has such an energy about it and stands out from the rest of the cast, possibly due with the advantage of being in the production since it’s beginnings in New Zeeland. You’re left wanting to follow his pathway throughout the performance, which luckily our fate led to. It’s the small touches of dark humour that stands Moose out, before being quickly reminded that you’re in the apocalypse.

Unfortunately it’s obvious that the show has had to make severe compromises to be in London, which is made even more sour by the ticket price being tripled. There are no vehicles, no explosions, fewer infected (this may increase as time goes on), less shots fired, fewer cast members, no large artillery. On top of this, the set is less developed, the atmosphere of waiting around in the rain is gone and the crowd numbers seem way too large to feel a sense of personal danger.

The Generation of Z is in London until the 5th July, tickets can be purchased here: www.thegenerationofz.com.