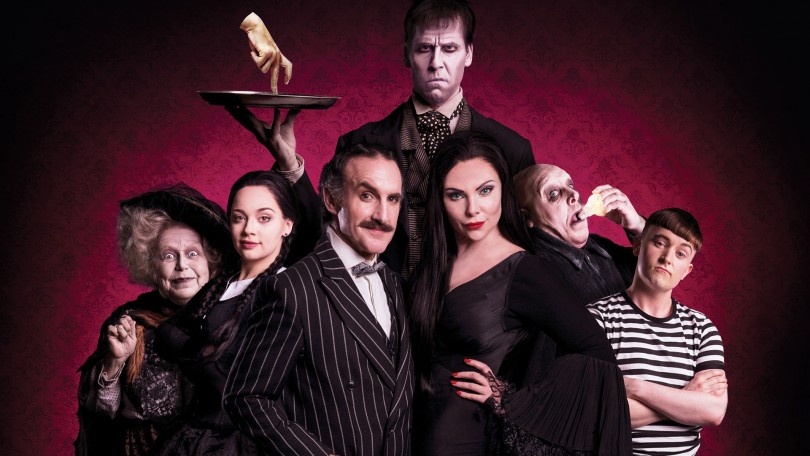 Reviewed on 23/05/17 at the Marlowe Theatre, Canterbury

The Addams Family Musical has been resurrected once more with it’s UK premiere, filled with an all-star cast including Samantha Womack as Mortica, Carrie Hope Fletcher as Wednesday and Les Dennis as Uncle Fester.

The stage adaptation sees the kooky, eccentric family facing an outsider to household, Wednesday Addams’ first love, Lucas Beineke – a stereotypical Ohio boy, he couldn’t be further unlike them. Oliver Ormson‘s performance as Lucas sees him channeling his previous stage appearance as Elder Price in the Book of Mormon, a young, naive teenager who is in way above his head.

Outside of both the families there’s a large supporting cast, which while not entirely needed for the show to work, helps to add an eery presence over the crucial scenes, really populating (and equally de-populating) The Addams Family Mansion. Plus, the range of costumes will have you marvel at the intricate details.

Talking about giving character the mansion, the set designs are wonderful (even if they are a bit wobbly at points!). It really utilises the performance space and brings everything to life that little bit more.

Outstanding performances come from all over the cast, Cameron Blakely‘s Gomez has all the charisma you’d expect, Carrie Hope Fletcher‘s innocence/non-innocence as Wednesday and Les Dennis‘ all-watching, comical Uncle Fester. The story balances this extremely well in the first half, while leading the story in the second.

Overall, The Addams Family Musical is a fun way to spend an evening for the family. The music is memorable, the jokes land and the performances are perfect across the board. It doesn’t become a pantomime or a pale imitation of the films, and that’s a big credit to the show.

The Addams Family Musical is at the Marlowe Theatre, Canterbury until Saturday 27th May 2017. Further UK dates: www.theaddamsfamily.co.uk.