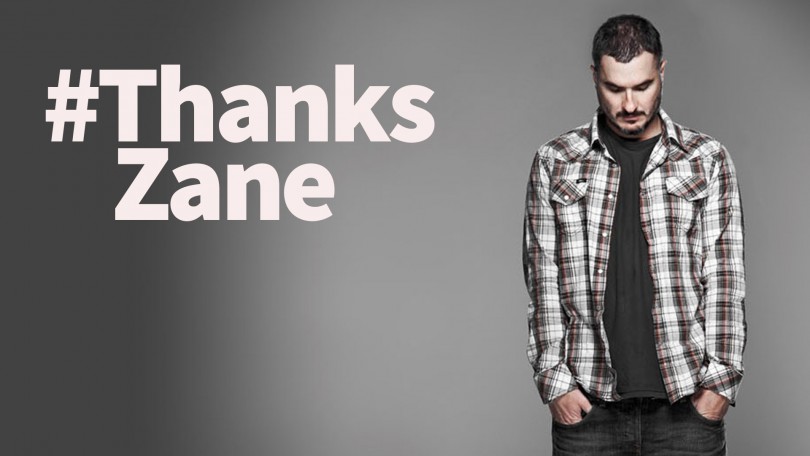 Today, the whole of the music world has been using the hashtag, #ThanksZane to show their outpouring thanks for the support he’s given to so many bands and artists over the more than a decade stay at Radio One. This is my personal thanks to Zane.

I grew up with Zane’s show always being on in the evenings, being my education into a world of music much wider than I had knew. It’s the same as Jools Holland’s “Later…”, but on a nightly basis with way more music, the assurance that I would find a bunch of music that I’d fall in love with every evening was beyond amazing.  But it’s not just the new bands that I would learn to love via his show, his interviews are something that is unlike anyone else’s in the business. A friend of everyone in music it seems, he can get on a level with artists to bring a new angle to their music and persona, whether that may be the egotistical heights of Kanye or the craziness of The Wombats.

His talent doesn’t just lay with radio, I’ve had the privilege of seeing Zane do a live DJ set opening for Skrillex back at Brixton Academy in 2012, and frequently ever since. Many great memories born from these appearances, switching from world-famous The White Stripes into something that a rising bedroom DJ had created is something you don’t see from most DJs, this mixed in with his incredible passion makes him the best DJ I’ve seen.

M0st importantly is his passion behind the careers of new bands/artists, he’s been responsible in playing a gigantic role in the success of The Wombats, Mumford & Sons, The Maccabees, Frank Turner, Arctic Monkeys, Royal Blood, Ed Sheeran and may more, the  list goes on and on. I so vividly remember the first time Zane spun Ed Sheeran’s first single, he was so pumped to eventually play something of his (as everything had been demo tapes before). He’s always been one-step ahead of everyone.

Today’s been a testament to how much the music industry owes to him, with the giants of bands such as U2 tweeting out #ThanksZane, along with the newest artists who have been recognising the amazing work he’s done for the people whose footsteps they will follow in.

It’s not going to be the same with Zane not being behind a mic, but least I’ll have the reassurance that he’ll be championing a new voice for new music by (allegedly) working on Apple’s music streaming service.