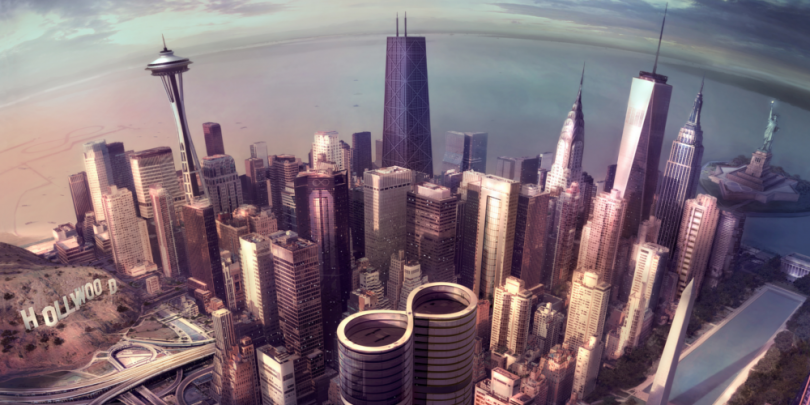 It’s been a while since I last listened to the Foo Fighters. Growing up in my generation they were all around you. The early hits from The Colour and the Shape have been on the radio for as long as I can remember and childhood summers were soundtracked by songs such as “Best of You” and “The Pretender”. The last time I actively listened to the Foo Fighters was a month after their last album, Wasted Light, was released. For the first month I loved the record; it was loud, full of hooks and worthy of its Grammy Award winning praise. But after that first month the energy that record had, easily burnt out. Lyrics have never been the focus of a great Foo Fighters but at the least songs such as “My Hero” and “All My Life” had some up lifting message that could connect to someone. The lyrics on Wasted Light are devoid of any real emotion because of that the songs fell flat no matter how loud they were. When preparing myself for Sonic Highways I found myself listening to the Foo Fighters for the first time in three and a half years.

The concept behind Sonic Highways is that Dave Grohl and Co. went to eight of America’s greatest musical cities in hopes of writing a song inspired by each city. Already I was a little doubtful, not only is this is a large task but how would an album where each song was recorded in various places and styles going to tie itself together to be one cohesive product? To accompany this album is an HBO series by the same name that documents the history of each of these cities and the recording process of each song. With the success of Dave Grohl’s Sound City last year, it was no doubt that this would be a worthwhile series.

As for the album, it’s hard to really like it when it misses the mark by this much. When going into this album I though the songs would take more from the cities sound and less from the usual Foo Fighters sound. When listening to this album, most songs stylistic origins are impossible to tell apart unless you know quite clearly which cities these songs were recorded in. I guess I was mistaken when expecting the Chicago song to sound like a real Chicago Blues or Glam song; obviously there would still be Foo Fighters-isms but instead of a 50% split most songs barley get 10-20% of the cities sound into them. And to top it off this isn’t even top grade Foo Fighters material. None of these songs really have a good hook or riff to them in the way that previous albums have.

The closest the Foo Fighters get to my expectation are on the tracks “Congregation”, “What Did I Do?/ God As My Witness” and, “Outside”. “Congregation” and “Why Did I Do?/ God As My Witness” do a good job injecting the Country/Southern influence into the Foo Fighters but that’s only because it’s such a juxtaposition of the usual Foo Fighters sound. The song I enjoy the most on this album is “Outside”. It’s split on two ideas; a fast West Coast Punk riff and the reverb soaked guitars that are known as being the building blocks for generations of Californian bands. Each song features an artist local to that city but Eagle’s Guitarist, Joe Walsh, does a great job with a solo that doesn’t throw off the rest of the song. Many times the featured artist is barely recognizable underneath the immense sound that Foo Fighters produce on their own.

This album really just seems like an add-on to the HBO series, especially since you can’t really understand the importance of these songs without watching it. Like I said before, Dave Grohl has a real knack for making great music documentaries. In the series he does a great job sharing his personal stories as well as the history of each city. When this series is put out on Blu-ray I’ll happily purchase it, as for the album I can’t imagine myself listening to it again in the future.

The Foo Fighters are coming to the UK next year with a stadium tour, for all the dates, click here.