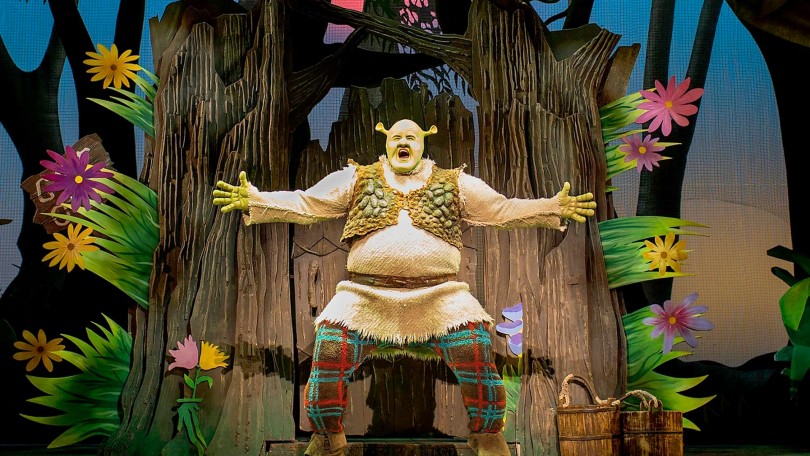 Before delving into this review, I’d like to just make a few caveats to set the picture: I’m a 23 year old without any kids and secondly, this performance was taking place during the England semi-final game, hence the auditorium was half-full (or empty).

When the opportunity to see Shrek The Musical came around, I was excited. Looking past it’s stature in the internet world, it’s a classic film that still holds with it’s meta outlook of the fantasy world.

Unfortunately this interpretation is a paint-by-numbers structure of a musical that seems to of gone slightly stale. Samuel Holmes as Lord Farquaad takes most of the laughs, his performance is the light at the end of the tunnel throughout the show – you’ll be sat waiting for his presence to return. The Dragon is also rather impressive in person.

Weirdly topped with current pop culture references including Love Island, it doesn’t come close to holding the charm of the films – there’s a reason why Big Brother was referenced in the films. Even when nodding it’s hat to other musicals, it’s achieved with cheap gags without thought or intelligence – especially when compared to how this is handled in shows like the Book of Mormon.

It’s parallels with a pantomime are closely observed, however it seems to take it self too seriously for this.

It’s a shame because I went in really wanting to enjoy Shrek The Musical for what I thought it was going to be, but falls short of this. Maybe it’ll be different a full house but the showing we saw was poor and unimaginative.

Shrek The Musical is a pantomime but without the charm.

Shrek The Musical plays at the Marlowe Theatre, Canterbury until 22nd July. More information can be found here.