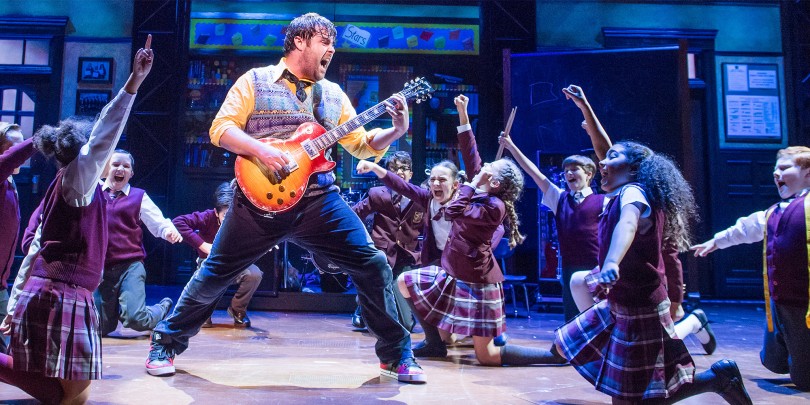 School Of Rock is one of those movies that whenever it’s on, it brings a smile to your face no mater what the circumstance. Possibly, a timeless classic – so we walked into the New London Theatre anxious but also intrigued to see the show bought to life thirteen years after it’s inception.

David Fynn had the hardest role to take on, Jack Black’s iconic Dewey Finn – he manages to bring the character into his own, while also keeping on the energy that encompasses and drives School Of Rock. The chemistry and manor that he has with the class is a joy to watch unfold, even only with a few weeks under their belt and a total of 39 different child actors across the board, alternating to play 13 roles. As with the kids (that we’ll come onto later), he plays live guitar at several points throughout. It’s clear he’s still getting used to performing while with a guitar, but it’s a cracking start and can’t wait to see what the show will be like a few more weeks down the line.

Now onto the make or break for the show; the children. It’s phenomenal. Tom Abisgold held the stage and captivated the crowd with his lead guitar, Jude Harper-Wrobel had several impressive drum fills throughout, Lois Jenkins grooving it with the bass and James Lawson on the keys with a solo ready to rival JJ Abrams. All of this surrounded by gems everywhere, other highlights included Eva Trodd as Summer, Nicole Dube as Tomika and Joshua Vaughan as Billy – but there’s honestly no weak link at all, everyone is on-point and shines through at some point.

Not forgetting the rest of the adult cast, Florence Andrews plays Principle Mullins to a tee, Oliver Jackson creating the suppressed bromance with Dewey as Ned Schneebly and Preeya Kalidas as the annoying other half, Patty Di Marco. The rest of the ensemble also fall right into place, while managing to not take the spotlight off the young cast.

It’s a shame to see no credit going towards the genius that is Richard Linklater, who directed the original film. It was his curation of the screenplay and direction that shaped the story we have today, and has been so wonderfully transcribed to the stage.

It’s safe to say that School of Rock The Musical is a triumph, the show hits on it’s own beats with a stellar soundtrack ranging from rock to ballads. It embraces the original film with a warm hug to create one of the most enjoyable evenings you can have in London’s West-End. Expect this to be “that” show that’s creating stars years down the line.

School of Rock The Musical is now playing at the New London Theatre, London. Tickets can be purchased at www.SchoolOfRockTheMusical.co.uk.