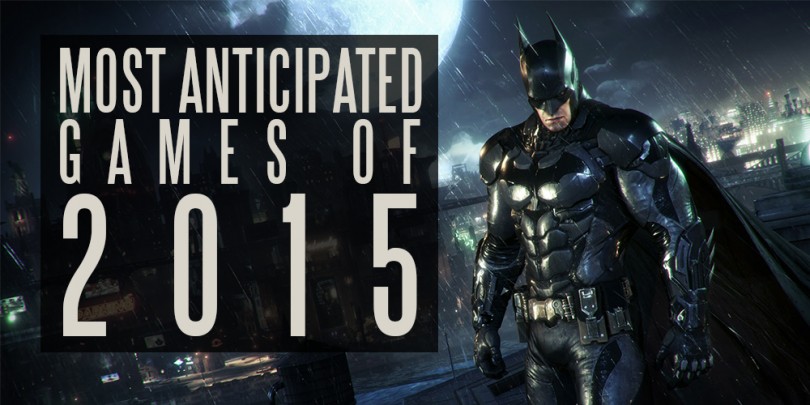 2014 was a great year in gaming, but 2015 is looking to exceed that. We look ahead to see what games we’re looking forward to the most!

Announced during the PlayStation Experience this year, Drawn to Death is a class based shooter that takes place in the notebook of a teenage boy. Aside from the genius setting and premise, nothing but great things have been said about the gameplay and diversity of material in the game. The fact that each class feels different, and the promise that each one contributes a unique element to the match, making replay value and experimental strategies a prominent role in the game.

Having enjoyed the previous Battlefront games, and loving what Dice did with the latest Battlefield. Battlefront sounds like a perfect hybrid of the two products. Judging from what Battlefield, with it’s heavy emphasis on in-game, player generated events and then applying it to the Star Wars universe, should be amazing! I have a feeling this is the Star Wars game many fans have been drooling to get their hands on, myself included.

A gigantic open world, crazy people, fast cars and a lot of dust sounds completely mad! Hopefully arriving in 2015, Mad Max, looks to bring an insane open world, with gritty, realistic gameplay elements to players. Much like Star Wars Battlefront, a feature film aligns closely with the release of the game. The direction the project seems to be taking, really speaks to my style of gaming. I only hope that the story packs as much as a punch as it’s promised brutal combat.

Having been delayed into 2015, the conclusion to the Rocksteady Batman trilogy remains one of my most anticipated upcoming games. For everyone that has played an Arkham game, rather it be Asylum or City, can agree the longer these games are in development, the better the final product will be. The addition of the batmobile, along with new mechanics and enemy types, ensures that the Arkham franchise will be wrapping up with a bang.

More blood, masks and hours of ripping my hair out in frustration… what’s not to like? The popular growing culture of indie games has seen many impeccable examples of intimate gaming experiences, and I hope to see Hotline Miami 2: Wrong Number follow suit. The original Hotline Miami is one of the very best indie games ever created, therefore by default, I’m extremely excited to see what inventive content the developer brings to the table with this sequel.

Coming off of the success of the small, yet greatly entertaining Ground Zeros, The Phantom Pain plans to deliver many nuances to the Metal Gear franchise. My perception leads me to believe that The Phantom Pain just might be one of the more ambitious games on this list. From the beautiful graphics, to the size and scope of the world and story, along with the on-par mechanics brought to the table with the prequel, nothing bad foreshadows the future of this game.

Games have evolved into something much bigger than run, jump, shoot. No Man’s Sky promises players endless space exploration made possible by the power of the PlayStation 4.  Along with the insane use of technology from the developers, no Man’s Sky is enticing for every gamer. The significance on endless replay value, along with it’s aesthetic and nonlinearity have already sold gamers all around the world.

The continuation of Nathan Drake’s story solidified my purchase before the 15 minutes of gameplay dropped. Seeing the onstage demo, my hype level is through the roof. After my play through of The Last of Us, anything that comes out of Naughty Dog will be in my hands Day One. A Thief’s End will likely bring on a remastered bundle of all three previous Uncharted games, count me in.

Recently the PlayStation 4 exclusive, The Order: 1886 got legs. Previewed poorly since E3, not many gamers were into The Order. Fortunately, PlayStation Experience changed gamer outlooks, including mine. As far as we know, The Order: 1886 is a linear, narrative driven, third person shooter, with heavy emphasis on in-game cinematics. A few things that get me excited about The Order are the cinematography and great aesthetic based lighting. Releasing in February, it’s the first 2015 game I’m super pumped for.

Last, but certainly not least, The Witcher 3: Wild Hunt, embarks upon presenting gamers with a grand and ambitious game world. Visually breathtaking and narratively intriguing, Wild Hunt has been on my radar quite some time now. Though it’s pitch is extremely enticing, the game has quite the uphill battle to fight with this years release of Dragon Age: Inquisition.