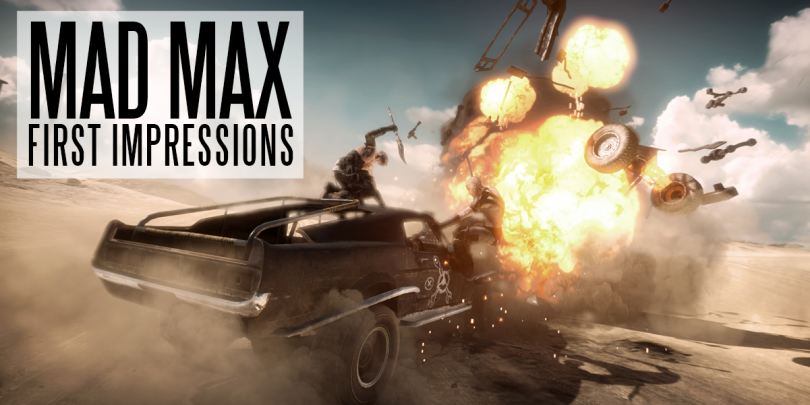 It’s finally here, Mad Max the video game, heading face on with Metal Gear Solid V: The Phantom Pain. In short, the game is about a man building his car. Arguably what the film franchise is about but does this make for an exciting game? Kind of.

We’ll brake this down into different sections, first is quite possibly the most important aspect of the game, driving. For the first hour and a bit, I hated it. It felt like every slight touch would have a slight delay in it’s handling, similar to GTA IV’s driving mechanisms but shortly after this, the upgrade options began to unfold then I become more and more sold on it. The handling, acceleration and robustness all improved to a notable point, allowing me to start to explain the terrain with freedom. It appears that there is much more improvements to be made to the driving making for an interesting prospect as to how far this will improve, maybe to a point where it’s too easy of a drive throughout the vast wasteland?

While on the topic of driving, vehicular combat also plays a crucial part to the Mad Max landscape. While playing I’ve found that momentum is key, when all the cars come to a standstill, it’s hard to recover an enjoyable battle. The ammo is sparse so expect lots of nitro boosts throughout the rival’s arsenal and plenty of side dodging. The rare times you have ammo freed up to neutralise the enemy, it is a glorious day.

For the times you’re not in a car, you’ll be wondering the dunes. While walking, the game does slow down at an incredible rate. Jumping does not do an awful lot and sprinting will only slightly increase your pace.

The hand-to-hand combat is an extremely simplified brawler, in similar vein to the Arkham series. Every kill feels like it’s given Max a beating which is something that the films also offer, so don’t expect a fluid ride. Combos start to build up as you progress but nothing is really skill, just repeatedly hitting with the often dodge. This leads to a “fury” mode where Max is injected with added energy, making every punch land that slight bit harder, this feels brilliant but can often come too late after a fight.

We’ve previously touched upon the landscape of the game. It’s vast, often feeling empty but this is where it becomes hard, the films are known for this so where should the line be drawn between keeping to the franchise and creating an enjoyable game? There’s lots of empty space but to contrast this the map is gigantic and I’m excited to explore, I just hope that it’s not more of the same.

What has also intrigued me with this game throughout it’s marketing campaign, is it’s content. It’s billed as an open-world game, which it is, featuring a significant amount of side missions to accompany it’s main campaign. There’s outposts to bring down and balloons to raise you in the sky, allowing you to survey the horizon. One thing that really did stand out was once you are raised in the air to scout for local activities, you actually do the scouting yourself with a pair of binoculars, it’s only a small thing but I though this was really neat. The mission structure does often fall into go to a location, recover an item, return to base. Hopefully this will develop alongside the narrative.

In conclusion, Mad Max does offer a promising start and it’ll be interesting to see where it will go from here. It’s safe to say this does fit in perfectly with Mad Max: Fury Road despite the developers insisting it’s a standalone experience, leaving it to be one of the best movie video games, which wasn’t that hard of an achievement to receive in the first place!

Mad Max is available on PS4, Xbox One and PC, releasing on Tuesday 1st September 2015. You can pre-order by click here.