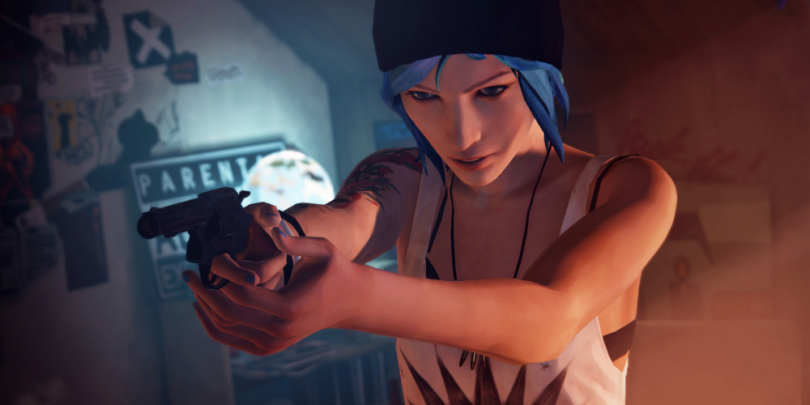 Life is strange indeed, and French developer Dontnod, shows us how much stranger it would be possessing the power of time reversal.

Part of a growing trend, Life is Strange, is a five-part episodic adventure game that relies on player choice. Chrysalis; episode one of Life is Strange, puts players into the role of Max, an aspiring young photographer with the power to reverse short-term time. Max fits the profile of an indie movie protagonist perfectly, and that’s not where the nods to indie films stop. The game looks and feels just like a high school story you’d see come out of Sundance. Lighting, music, and set pieces aesthetically match the tone of an intimate, small-scale movie. The 90 minute plus runtime also helps the pace feel along the lines of something closer to the medium of cinema than we commonly see in games.

Max returns to her hometown of Arcadia, Oregon, to attend the local high school that’s known for it’s prized photography program. Coming from Seattle, she moves into the school dorm and begins her senior year with intentions to take the next step in her career. Yet, not long into the year she realizes, through some strange dream sequence, she has the power to reverse time. The freedom you’re given with this new mechanic is truly a game changer. It breaks down the medium of adventure games and adds a completely new dynamic to the most basic decisions.

The playable protagonist, Max, is a relatable and grounded human spirit who allows the game to go places that really work. Aside from her mostly stellar voice acting, Max is given many hints of personality and character development through the world Dontnod has presented. In the game’s first moments you’re given an option to read her journal or continue with the story, overlooking it entirely. Of course, I jumped right in and with that decision gained inside knowledge of Max as a person. These commonly hidden in plain sight clues of personality and development are what make this game special. Characters are rarely shoved down the player’s throat, and are presented in a subtle fashion that requires further investigation to gain an understanding to who they are as people. This element of gameplay makes Life is Strange, feel real, and helps the relevant ideas and messages gain a relatable respect.

Chrysalis also introduces players to a perfectly atmospheric soundtrack that had me searching the internet to compile each and every track to listen to over and over again. While revisiting a few of the songs since my play-through, it has triggered a thought-provoking inner dialogue about what the game sets out to do and what it accomplishes. Episode one is a step in the right direction and introduces us to a story and characters that are resonating and compelling. Thanks to a solid first script–with only a few missteps–and brilliant sound design along with mostly great voice acting, Life is Strange is fundamentally heading in the right direction. Though it isn’t as perfect as, say, the set up to Telltale Games The Walking Dead, it’s a strong start to what hopefully becomes a terrific adventure game.

At times I felt a bit like a passive participant rather than the protagonist. This is because many of the choices come down to either A or B, with the minor inclusion of C, D or E. The absence of more than two options come decision time, makes the game feel more linear than I believe it set out to be. Though the time travel aspect does help soften the blow, a few more inclusions of various decisions would have strengthened the game, making it more personal and well-rounded.

I found it slightly hard to connect with the characters due to the poor mouth animation and constant stereotypes, but luckily Max had enough opinions that I was able to get behind her. The script does occasionally meander, continually pulling me out of the game. Lack of nuance with rare, but apparent conversational and inner dialogue was slightly jarring and could have easily been removed.

Along the course of the story, Max is reunited with her closest childhood friend, Chloe, a so-called rebel that is fed up with many aspects of her life. Chloe brings a great small-town dynamic to the game and gives the story a new, unleashed personality that achieves a sense of character freedom. It’s notable that she will become the game’s second and welcomed star.

One of the most notable accomplishments of Life is Strange – Episode 1, is the sense of place in the small Oregon town. The town has a feel much like Goonies and Super 8. The game takes place in modern times, yet has a preserved classiness to it’s school campus and other set pieces that give it a coziness that instantly drew me in.