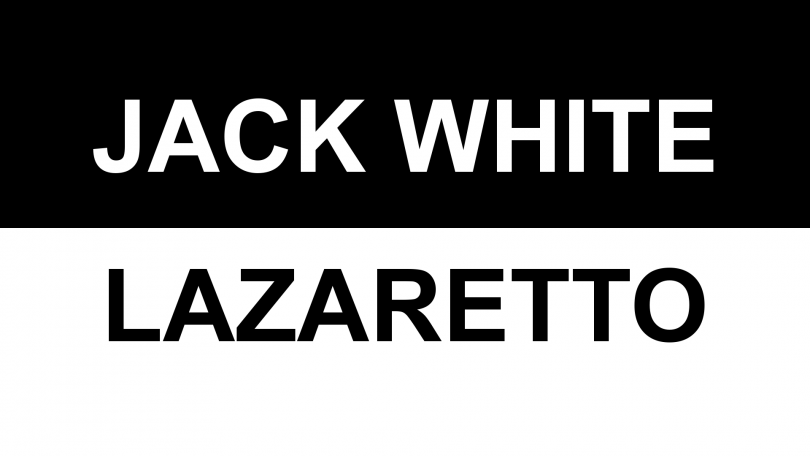 It feels as if I have grown up listening to Jack White’s music. It has been eleven years since The White Stripes 4th studio album, Elephant, was released. This album for me (like most people) was an introduction to Jack White’s music. Ever since then any project that Jack White has been involved in has been on my radar. So when I heard Jack White would be releasing a new album this year I got ready again for what was to come.

Lazaretto is the second solo record from Jack White. 2012’s debut, Blunderbuss, was a great portrayal of all the influences on Jack White’s musical style. It was the first time fans heard a sound this derived of influences from White yet done with the great sense of attention and modern flavor that makes a Jack White project iconic. If I had to make a comparison of Blunderbuss to another release by Jack White it would be 2007’s, Icky Thump; an album that brought the White Stripes sound to an even greater height before being put to a halt. The glitchy guitars made it feel as if White had picked up where he left off, a perfect transition into this new era of White’s music.

My only complaint with Blunderbuss was that the songs were some of the most simplistic in White’s catalog. That problem, at least for some of the better songs on the album, seems to be fixed on Lazaretto. This album starts out very strong. Songs like “Would You Fight For My Love?” “High Ball Stepper,” and the title track all show that after seventeen years White can still make new and refreshing music from one of the oldest genres in modern music. A feat such as this really hasn’t ever been done by any of his contemporaries. The harmonica solo on “Three Women” and the fiddle one on “Lazaretto” show White’s ability to translate his sound from the guitar to other instruments. It’s definitely one of the highlights on the album.

While the first half of this album is full of exciting moments the second half puts the album off kilter. “Alone in My Home” is the exception. This piano driven, upbeat pop song is a great display of White’s songwriting abilities and reminds me of the 2005 album Get Behind Me Satan quite possibly one of the least praised White Stripes albums. If Blunderbuss could be compared to Icky Thump than Lazaretto is definitely comparable to Get Behind Me Satan. There are many instances where the piano is the focal point of songs taking a more carefree tone referencing this era of The White Stripes. As for the rest of the second half, the dark and twisted “That Black Bat Licorice” is probably the heaviest moment but still it’s hard to compare it to the first half.

What made Blunderbuss such a great overall album was the contrast of Country and Folk ballads with high level Rock songs and immense guitar solos. If the listener was getting bored with one sound the other would take over just in time to keep them listening. With Lazaretto this doesn’t seem to really happen. Lazaretto feels more like a compilation than a thought out album and if White were to have done what he did with Blunderbuss on Lazaretto it might have actually have turned out the better album of the two. Imagine if “Alone in My Home” or “Entitlement” were contrasted with a heavy guitar solo. I feel like more songs would be interesting not just to fans but to the public in general. That’s another thing, aside from the title track there really doesn’t seem to be any single power on this album. I can’t see this album being played on the radio in a couple of months.