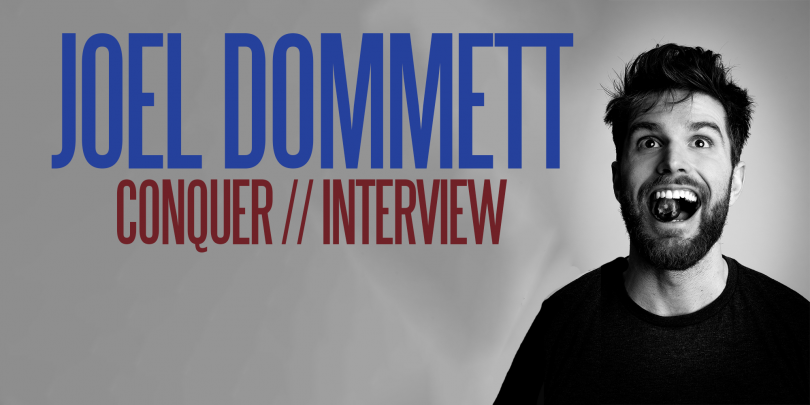 We caught up with Joel Dommett to chat about his upcoming show “Conquer” at the Edinburgh Fringe, also we chat about the Free Fringe, Impractical Jokers and BBC Three!

CM: Thanks for joining us today! How’s life shaping up towards the Fringe?

JD: Good! This is by far my favourite show I’ve ever written. I’m looking forward to getting up there, enjoying it for the first bit of the month, hating it in the middle then enjoying it towards the end again!

CM: How much does your show change over the preview phase that we’re currently in?

JD: So much. At the start it’s just scraps of stories strung together by nothing and by the end it’s lots of jokes neatly packed in a nice package for Edinburgh audiences to look at with their judging eyes. I try my best to change the show as much as I can at every preview. You need to have a good preview every now and then to gain confidence in the show, but if you put riskier aspects into it and you fail, you learn more.

CM: What can people expect from “Joel Dommett: Conquer”?

CM: Over the last couple of years, your show has been included in the Free Fringe at Edinburgh, you’re one of the biggest names that opt to partake in this, what’s reasoning behind it?

JD: I love putting together fringe shows but the actual fringe was so stressful. I wrote a list of the things that stressed me out and tried to eliminate them. The first was ticket sales. I always sold ok at the paid venues but last year I played to more people in the first 12 days then I did in the previous 2 paid shows overall. The shows were so much easier to play and way more fun for me and the audience. There is still a place for the paid venues, they are so great too but Free is the right thing for me for now.

CM: We loved seeing you in the UK/BBC Three version of Impractical Jokers, was this an enjoyable experience?

JD: It was so so hard to film! The first season we filmed during edinburgh festival so we were all rushing to our shows after filming. We were all so unsure whether the show was funny or not! After the first season came out and everyone liked it, it became a little easier but shaming yourself in front of the public really never got any easier!

CM: While we’re on this subject, what are you thoughts on the closure of BBC Three?

JD: On one hand I understand that someone needs to lead the charge to online only channels and the ‘youthy channel’ seems like the most obvious one to pick. Although on the other hand they have really stripped the budget and it immediately becomes a weaker brand. It’s going to be much harder to get new writing and performers on the first rung of the ladder as other channels take much less risks.

CM: Any tips to the people who are taking the reins of the newer version over on Comedy Central?

JD: I think the series is going to be on channel 5!* I haven’t heard much about it but I hope it’s not better than ours 😉

[*We were both right, it’s a co-production between Channel 5 & Comedy Central]

You can catch “Joel Dommett: Conquer” at the Laughing Horse from the 6th to the 29th August 2015 (not 28th). For more information, click here.