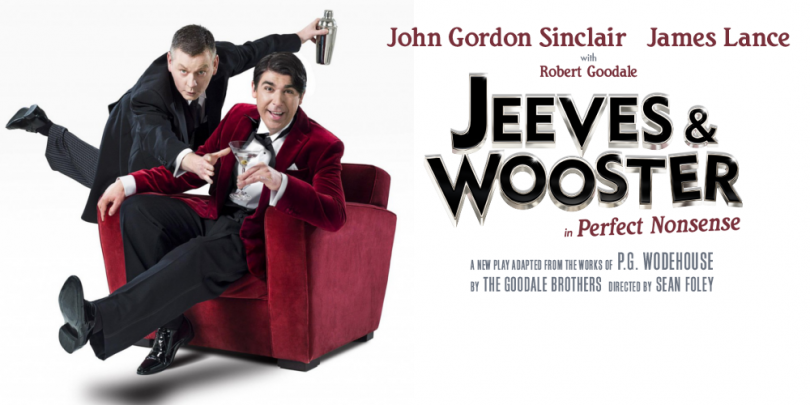 Reviewed on Tuesday 18th November 2014 at the Mayflower Theatre, Southampton

Fresh from London’s West End, “Jeeves & Wooster in Perfect Nonsense” has hit the road with John Gordon Sinclair and James Lance taking up the respective roles.

With the minimal ensemble of three men, the chemistry  had to be there, and be there it is. They trust each other in their roles, using the disadvantage of a small cast to a very strong advantage. James Lance puts his very own touch on Wooster, playing him in with a large portion of slapstick in his genes while the other two actors brilliantly play a range of roles, truly showing their capabilities as actors.

The true charm and heart of the show is when it breaks the fourth wall and speaks to the audience, often, this technique can become cheesy and fail but the show doesn’t do that, it encompasses breaking the foruth wall and makes the show what it is, without it, I don’t know what the show would be.

The set pieces are incredibly well timed, comedically and physically, whether that be the slow-motion antiques scenario or the a simple car journey.

Where the show starts to fall flat, is when it delves into the story, of which there is not much of. At no point was I compelled by the narrative, I admire it’s simplicity but it’s fleshed out unneededly so. The show really is about the three actors and bringing a story to life, a night of innocent fun.

You can catch “Jeeves and Wooster in Perfect Nonsense” at the Mayflower Theatre in Southampton until Saturday 22nd November, the tour then continues to Glasgow and Bath. All dates and tickets can be found here: www.jeevesandwoosterplay.com/tour/.