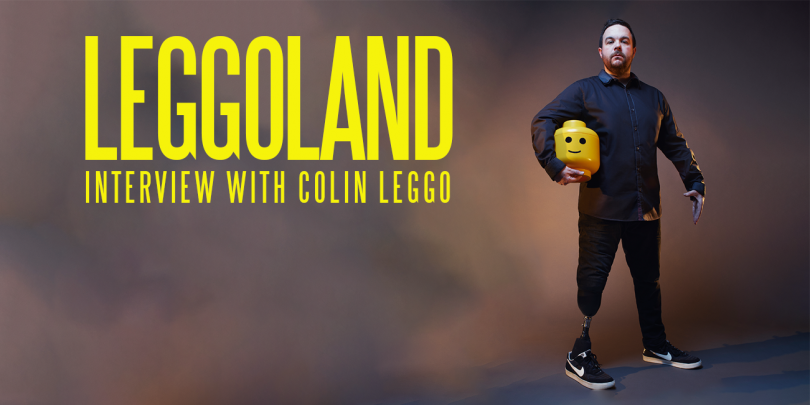 One of the best named shows of the year’s Fringe, Leggoland, tells the story of Colin Leggo becoming an amputee over the past year. We caught up with him just before the Fringe started to talk all things Edinburgh!

CM: Hello! Thanks for joining us today, how’s it going with the Fringe imminent?

CM: What came first, the title of the show or it’s contents?

CL: Definitely the content. It’s a true story filled with medical anecdotes and exquisitely surreal happenings throughout the last decade leading up to me saying goodbye to my right leg. The title was a lightbulb moment when I was planning my first preview back in February. It seemed like the obvious way to go because of my surname.

CM: What can we expect from Leggoland?

CM: Quite a lot of the show’s content is very personal, is it hard to turn into comedy material?

CL: Yes, the material is personal and also true, but being a very positive person I found it fairly easy to look at any situation during all this leg malarkey and find a comedy spin on it. I’ve never wanted the show to be too ‘message filled’ or come across as “oh, poor me with my stupid leg”, so even though the stories are personal and based on what could be difficult subject matter there’s always a level of ridiculousness to them and a silly vibe running throughout.

CM: How was the process of creating a debut hour?

CL: Exciting and rewarding in equal measure. Doing previews for the show has been a huge learning curve and I’ve enjoyed workshopping ideas with audiences during the months leading up to the festival. The first time I ran through it in front of an audience I was stunned to find it ran at exactly 60 minutes. I’m the most punctual person I know and this excited me immensely! I was probably more pumped about that than about how the gig actually went.

CL: In 2003 myself and my double act partner Rob, from Colin & Rob, did a spot in a variety night at the Gilded Balloon caves. We were on after Jimmy Carr, quite an act to follow when you’re unknowns, and on entering the stage some of the audience began to leave. Then Rob managed to head-butt a speaker and started our set slightly concussed. I was unaware of this and thought he was just reacting to the single pint he had drank beforehand. After what seemed like a lifetime of missed punchlines and mumbling from the both of us, the gig finished with a pint glass being accidentally dropped from the top balcony onto the lower audience, causing a small fight to break out between the remaining punters. It was a gig I’d rather forget.

You can see Colin Leggo in “Leggoland” at the Laughing Horse at 13:30. For more information, click here.