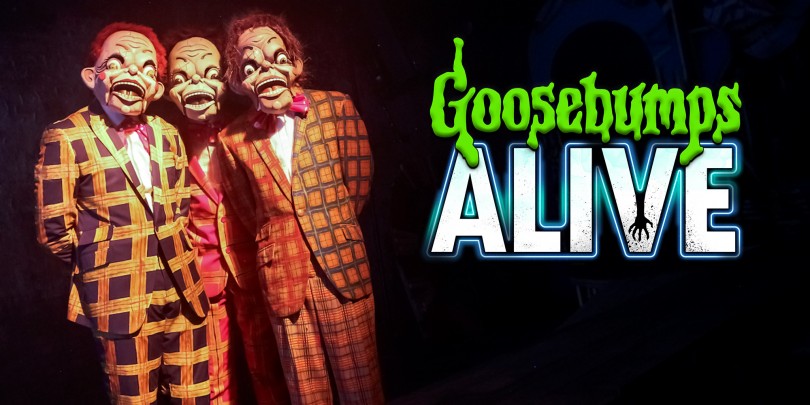 Billed as “the knife’s edge of fright and fun”, the ambitions and scope of Goosebumps Alive are admirably high, and partially achieves what they’ve set out to show.  On entry to the murky tunnels, you’ll be assigned one of four animals, all of which offer a unique path of rooms to explore. With each animal, you’ll only experience around half of what has been created, bringing the desire of returning to the attraction during it’s run to explore the other rooms.

Production and set design is the gleaming success of Goosebumps Alive. Easily, the attraction could of been a purely walk-through exhibition in honour to the franchise (similar to Bond In Motion) and gained critical success. Waterloo’s Vaults have been completely transformed into new worlds, the often under-rated aspect of lighting tops this off. It’s obvious that months of preparation has contributed to the decor and technical details. The floor-plan is extremely well crafted, crossing paths with other participants, never quite knowing where you were going or had been. There were minor problems with sound leakage from other spaces, but the actors appropriately adjusted their lines for this, offering some added humour.

If you’re looking for only horror, this may not exactly be what you’re after. The only true scare-moments we experienced seemed to appear in “filler” moments, all of which featured zero actors and relied on pure claustrophobia (of which we advise not going if you’re prone to the condition, a fellow audience member suffered from the condition past the point of being scared, and was unable to exit, making the whole segment very uncomfortable for everyone involved).

The over-arching issue is that it never really commits to exactly what it wants to be, from being a master-class in puppetry, awkward social situations, dark comedy sketches and interactive theatre, it came together and landed on one thing, being bookended by a very loose plot.

In conclusion, Goosebumps Alive has all the ingredients for a spectacular attraction but needs some shaping before it quite achieves that title. If you’re into the pre-existing material of Goosebumps, it’s a pleasure to surrounded by the locations and stories that connected to so many childhoods.

Goosebumps Alive is on at The Vaults (Waterloo), London until the 5th June 2016. Tickets can be purchased by visiting www.goosebumpsalive.com.