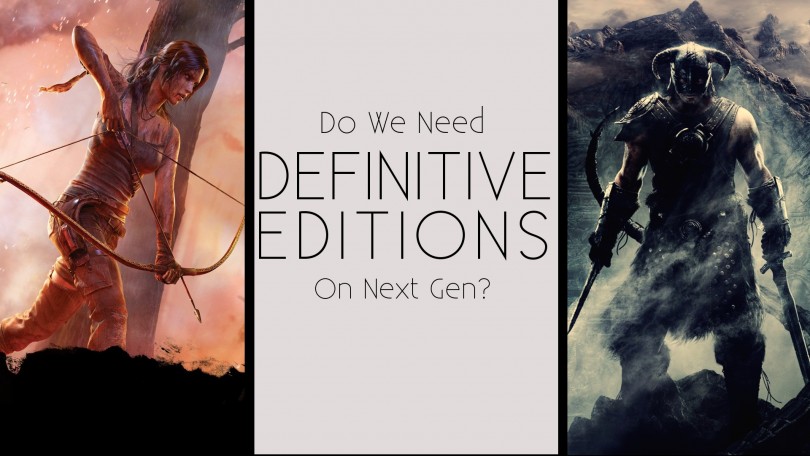 Do we need Definitive Editions? With the upcoming release of Tomb Raider: Definitive Edition and rumoured definitive version of Skyrim being on the horizon, is it  needed for these games for the current gen games brought to the Playstation 4 and Xbox One?

If you don’t know what a “definitive edition” is, it’s where a previous generation (PS3 & Xbox 360) game is ported over to the next gen (PS4 & Xbox One), generally looking substantially better. Also as we have seen with Tomb Raider, it can come with all the DLC which has been released for it.

It all comes down the price point really, if the RRPs are around the £30/$40 mark then I think that this seems very reasonable, but going by Tomb Raider which is priced at around £45/$59.99, it seems like a very steep price point. I really hope that this price starts to fall to a point where I’m happy to purchase it. Another way around this would be to offer an upgrade purchase like what we saw with Assassin’s Creed IV: Black Flag, Call Of Duty Ghosts and several others, where you paid £10/$10 for a next gen upgrade.

How much effort in the upgraded version of the game also makes a big difference, the only official one we have seen is Tomb Raider, they have had a studio specifically bringing this version to consumers. From video comparisons released from other gaming news outlets, it looks substantially better with new hair physics and lighting, also running at 1080p compared to the previous 720p. The thing is, it is still only running at 30 frames per second, which then brings up another question of how powerful this next-gen hardware actually is. With a game like Skyrim it probably doesn’t need much work on the actual game engine, with the PC version showing it’s true extent for how well it can work.

This new phase also gives the opportunity for consumers for who has missed the previous console generations to catch up with some classic games. It would be nice to see console exclusive games make their way to the next console in their family tree, including The Last Of Us, Gran Turismo 6, Halo 4, The Unfinished Swan and many more. Giving people who have made the switch to the opposing brand to experience games which they were previously unable too.

In conclusion more choice is never bad, giving consumers, where this is their first gaming console or first of the opposing brand, the opportunity to catch up with some well respected games. For “core gamers”, it probably wont appeal to you unless you loved that previous game and this gives you a chance to re-experience what you first saw was great about that game. In the end your wallet will shape if this is something that will become more common with console switches.

For a chance to win a £5 Xpress Games voucher, simply head to our Facebook page and tell us what game you would most like to see come to the next generation of consoles!