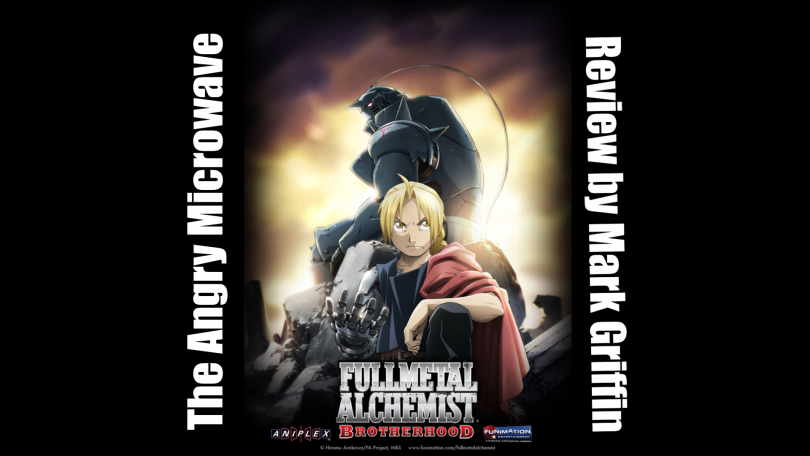 Set in a world where the power of alchemy exist as science. In this world it is possible to gain something by losing/ sacrificing something of equal value. This is equivalent exchange, the law alchemists go by. These alchemists also live with one taboo that should never be committed, human transmutation; this act can have unforgivable consequences.

The story follows two brothers. Edward and Alphonse Elric on their journey to find a Philosophers stone. This journey came about because of the two messing with this taboo of human transmutation, in result Alphonse lost his body but due to Edwards great abilities with alchemy he was able to bind Alphonse’s soul to a suit of armour but at the cost of an arm.

The show follows these two brothers as they travel the country of Amestris in hope of finding a stone to return Alphonse’s body back to normal, soon they uncover a major conspiracy that could spell the end for the whole nation if not the world. The two meet numerous characters along the way who help them out in order to reach their ultimate goal of obtaining a philosophers stone.

These characters described are revealed early on within the show. Giving details of some others characters could spoil some aspects of the story. There are some others I’d like to comment on but I’ll let you instead discover them for yourself.

Edward Elric – One of the two main characters of this show, Edward is also known as the fullmetal alchemist due to his automail (robotic arm and leg). He is a state alchemist meaning he takes orders from the military. Along the way more is revealed about the character and how he became who he is which again would be a bit of a spoiler if I talk about it. One thing I will say is that he is very short tempered towards comments about his height, this is constantly pointed out by others as the show goes along creating some great comedy.

Alphonse Elric – The younger brother of Edward, Alphonse is basically a suit of armour, nothing inside apart from a blood seal created by Edward at the sacrifice of his arm. This technically makes him immortal, well as long as the seal isn’t broken and the armour isn’t completely destroyed. Alphonse, also trained in alchemy travels round with Edward mainly helping him fight in hope of finding a philosophers stone to return his body.

Winrey Rockabella – Lifelong friends of both Edward and Alphonse, almost like a sister to them she plays the role of the mechanic for Edwards automail limbs, upgrading and fixing them when needed. A lovable character who simply wants to see her two best friends return things to how it was before the accident.

Roy Mustang – Also known as the flame alchemist, this cool and composed guy sure can light up a room with his alchemy. These abilities being shown as useful on multiple occasions throughout the show which just give the impression of him as being a badass.

Villains – This show contains many villain’s which progressively get harder and harder to defeat (as you would expect). Some good villains include Scar (a man solely set out for revenge again the country of Amestris after a troubled past) and lust (a woman who has obtained the power of the philosophers stone).

The animation for this show is really good, I own the Blu-ray collection and the quality is great. A lot of effort went into making show and because of this it should be able to stand up to shows that come out over the next few years.

Fullmetal alchemist:Brotherhood has a great soundtrack that accompanies the show throughout creating both epic and sad moments which have become some of my favourites I’ve seen.
The opening and ending music is very good, changing every 13 episodes or so they really reflect on the mood of the anime and can create a suitable atmosphere for different parts of the story.

To this day I would rate this as my favourite anime. With its blend of action, adventure, comedy and emotion it appeals to my taste in shows. I watched this show dubbed, meaning in English over the original Japanese, this is really down to personal preference though but depends whether you mind reading subtitles or simple want to kick back and watch the show, they are both great.