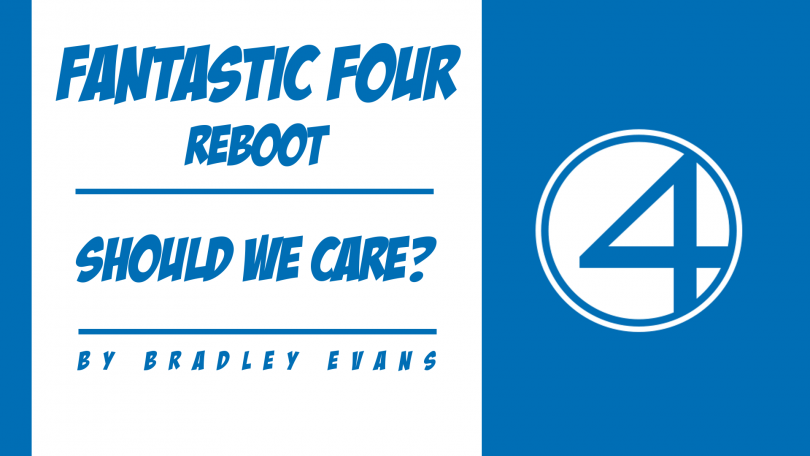 With news confirming that the script for a Fantastic Four reboot is now complete, and a June 2015 release date set, I have reached a realisation. I really do not care. Don’t get me wrong, I’m not suggesting the film itself will crash and burn like the two previous instalments (despite financial success, they are considered two of the worst comic adaptations in recent years). There are several reasons why I believe this film will be a vast improvement on its predecessors. However, in what is shaping up to be a pretty compact year for movies, you cannot help but feel underwhelmed by reboot of the 20th Century Fox vehicle.

As I said, there are several reasons why I am hopeful for this project. Firstly, the studio have attached some real talent to the production. It will reunite director Josh Trank and actor Michael B. Jordan, who previously collaborated on Chronicle, one of the biggest surprises of 2012. Granted, Trank has not worked on a feature since chronicle, but as a first time director he shot with such confidence and passion that not only does he deserve a chance with a larger project, but it will be interesting to see what the director can do with a considerable increase in budget.

At this stage, Michael B. Jordan is only rumoured to be attached. I believe there have been conversations between the talent and studio regrading this franchise. However, after the acclaim (albeit not enough) the actor received for his performance in Fruitvale Station, it would not surprise me if Jordan is rethinking his options. And why shouldn’t he? Jordan now finds himself in a position where he will have options and avenues he can explore. Don’t be surprised if we receive casting news soon that does not involve Michael B. Jordan.

2015 will be year of the blockbuster. Ask any avid cinema-goer what movies they are looking forward to, and they’ll give you 10 right off the bat. It is therefore somewhat inevitable that some films will be left short of their ambitions at the box office. There are 2 reasons why I feel a Fantastic Four reboot will struggle due to its release date.

Firstly, the studio is releasing another film on the exact same day of release, the highly anticipated Michael Fassbender project, Assassin Creed. I can guarantee that at least 90% of the Fantastic Four’s anticipated audience have played the game, or are at least excited about the prospect of an ‘Assassins‘ movie. The studio is aware of this, and could have taken advantage of the hype and banged out a film by now just for a profit if they desired. But they have faith in the project. Fassbender would not be so involved (he is starring and producing) if he did not feel confident with the potential of the franchise. This to me displays full support in Assassins Creed, and lack of confidence in their Fantastic four reboot. I fully expect the dates to change, but unless the two are released a good month apart, I don’t see the studios confidence in the reboot.

The second reason is simple. The state of superhero film is strong. Very strong. I’m not just talking about the financial success with the likes of the Dark Knight trilogy or every Marvel film produced in previous years. I’m talking anticipation from the viewer and ambition from the studio. Marvel have a blueprint of the direction they are taking the Avengers saga and its characters, leading up to and beyond 2018. Man steel was a success, and the stakes are so high with the DC / WB Justice league film that production of Superman vs Batman has been pushed back a full year, just so they can get it right (something I shall discuss in a future article). Even X-Men, which is owned by the same studio, have all guns blazing with the crossover of the two generations in Days of Future Past. My point is this, all of these films are part of something huge, something bigger than itself. I truly do not feel the time is right for an origins story, when its competition within the genre is so strong.

There is however one rumour flying around that could change everything. It has been reported that there is serious consideration to link the Fantastic Four universe to the studios hottest property. That just so happens to be X-Men. Imagine that, an X-men / Fantastic Four crossover! It’s safe to say that Xavier and his collection of mutants are doing well on their own. The rapidly approaching ‘Days of Future Past‘ (which will NOT feature any F4 characters) is the 2nd most expensive movie in history, falling several millions short of the budget given to Avatar. I can’t see many benefits for the ‘X’ films, but even a cameo or two in the Fantastic Four reboot could set the stage for something special. Who knows. It depends on how ambitious 20th Century Fox want to be with the two properties.