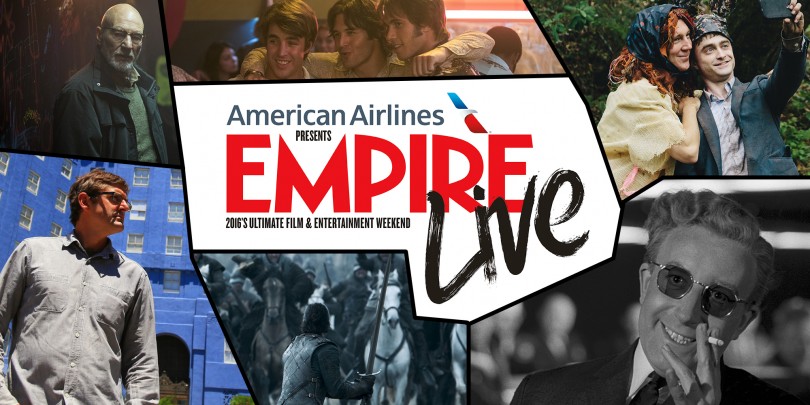 Britain’s newest film festival kicks off at the end of the month, with American Airlines’ Empire Live taking place at The O2 from Friday 23rd to Sunday 25th September 2016! With so much on offer over the three days, we’re going to break down the events you don’t want to miss…

Kicking the proceedings off is a double Daniel-Radcliffe bill, with the films switching from him as a farting corpse to an FBI agent. Creating waves in the festival circuit since the beginning of the year, Swiss Army Man will be making it’s UK-debut, followed by the dark thriller, Imperium. To top this off, Radcliffe will be present at the event to introduce the films.

We gave it four-and-a-half stars back in April when the film premiered at the Tribeca film festival (you can read our review here), and now it’s your chance to see the Louis Theroux’s latest disection of a cult, this time the church of Scientology!

Dr. Strangelove or: How I Learned to Stop Worrying and Love the Bomb

Let’s rewind to the beginning of 2016; it’s February and Secret Cinema’s event was actually a secret this time round, little did we know entering the military base that we were about see Dr. Strangelove unfold right before us – reigniting our love to Kubrick’s classic (our full review can be found here). It’s been just over six months and we can’t wait to to witness the classic on the big-screen again!

Everybody Wants Some and Green Room

If there’s two films of 2016 that didn’t get the cinema wide-release that they both deserved, it’s Everybody Wants Some and Green Room. That’s why we’re glad they’re included in Empire’s line-up for the festival, giving you one more chance to see them in a cinema.

There’s so much happening that we’d like to bring your attention to a few other amazing screeings happening over the weekend including War on Everyone, The Martian: Extended Edition, a Trainspotting live script read, seeing an episode of Game of Thrones on the big screen (where it belongs in out opinion) and numerous events in the Empire hub where if you’re a fan of the podcast, you can geek out all day long!