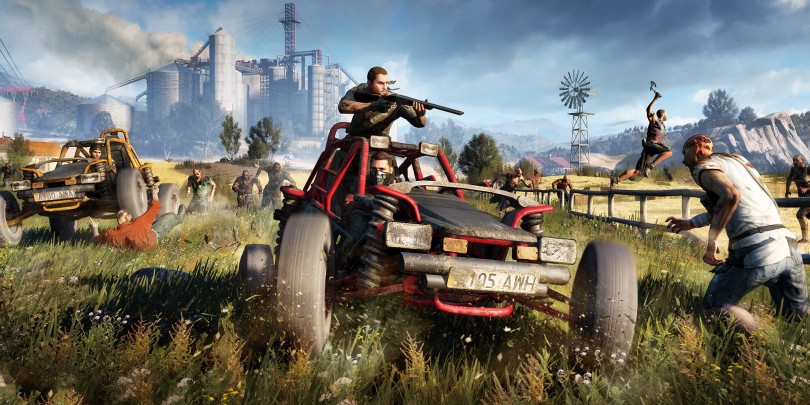 In a world where DLC is frequently frowned upon for it’s lacklustre content married ridiculous pricing (alas Batman: Arkham Knight’s Season Pass), Dying Light’s The Following rips through these pre-conceptions, dicing through it like a machete to a zombie corpse.

Let’s get down to the biggest addition to the title, your buggy! That’s right, the new way to traverse the zombie-infested skyline. One of the key reasons why this feels so natural within the gameplay is that the world was created for it, not shoe-horned in (again, alas Batman: Arkham Knight). Everything has a logic and reason underpinning it, syphoning the gas from where you fill it up, looking for craft materials from the bonnet and keeping an eye on the condition of individual mechanical parts all feels purposeful but not overwhelming due to it’s natural reasoning.

Minus the added ability to electrocute zombies with your powered cage or burn them with your flamethrower at high speeds, there’s also a new worthwhile story. The less you know about it though, the better as there’s several twists and turns that’ll catch you off guard, in short you’re following a cult where some messed up things are happening with it’s members. The ending is bold and divisive but also surpassingly satisfying.

Co-operative play is at it’s height within the game, stand-out moments from every play session are created, such as the moment where I was standing on top of a mountain with my two older siblings, all dressed in matching ninja outfits armed with flaming machetes with the cars parked up in formation while we collected gas for our buggies. Progressing through another player’s campaign is equally as rewarding for yourself, continually upgrading skill trees that carry other to your play-through.

Alongside the main narrative missions, we’re provided with a plethora of side-quests of which you’re pointed towards to progress the main quest. These are not totally game-changing and nor they should of been, an early set-piece mission with the car offers a window into a way the campaign could of gone but it lays of pushing that as something you need to master, this is responsibility is left to the driving challenges which you can become fully invested in, or simply not interact with and will not negatively impact on your experience. Every quest attempts to have a unique storyline behind it, often there’s a little bit too much and I found myself skipping these short chat sequences for what would turn out to simply be a fetch mission, but I’d rather it be there than completely absent!

Upon completion of The Following, I felt compelled to jump back into the original campaign of Dying Light to round off the new open-end quests. The restriction of no vehicles made me go back to basics with the parkour, giving it a new lease of life. This expansion could of easily had 20% more content and been titled Dying Light 2 and we would of been pleased with it, but this just shows promise for the future of the (hopefully future) franchise.

Dying Light: Enhanced Edition (full game plus season pass) and/or The Following DLC is available now on PS4, PC and Xbox One.