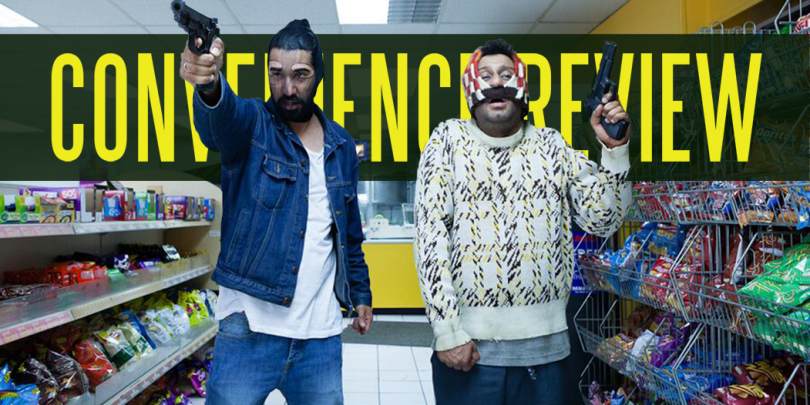 Following touring the film festival circuit over the past two years, Convenience is finally home where it belongs, Britain.

The premise that two friends, Ajay (Ray Panthaki) and Shaan (Adeel Akhtar), must hold up the convenience store until morning to gain enough money to repay a debt is a perfect set up to house a variety of contrasting characters on their late night shopping in the garage, also allowing for many comical set-ups.

The joy and gleaming success of Convenience lays within the three leads and their dynamic relationship which progresses throughout the night. Ajay and Shaan‘s “bromance” is believable and we see it challenged at points with the introduction of Levi (Vicky McClure), the store clerk. Towards the end of the second act, there’s some extremely long awkward situations but it never drags with the prospect of the interactions between the trio, everyone holds their own and controls the screen in a way that’s often lost with larger films.

As previously mentioned, the set up of the film welcomes some “guest spots” for visitors in the store. The most prevalent of these being Verne Troyer and Anthony Head, both of who are brilliant in the short time they’re on our screens. It brings a touch of Hollywood to what is a small, independent British feature. Was it crucial to the film? Not particularly but it did make for some brilliant moments adding some slight more depth and personality to Convenience as a whole.

The climax of the film feels like it’s trying to be something bigger and more explosive than it needs to be, in the end the laughs and pay off all derives from the core characters, not the potentially forced, added villains but this is simply a small gripe with a great piece of film-making.