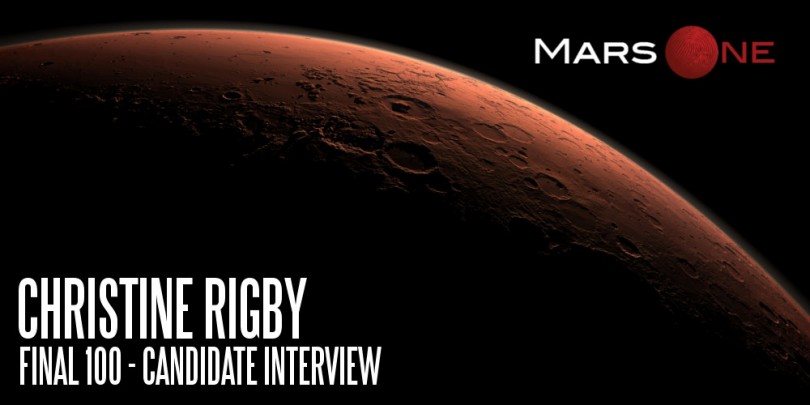 Mars One, is an exciting new, privatley funded, mission to put human life on Mars. Be sure to watch the video below for more explanation about the mission.

Over 200,000 candidates applied, now the list has been narrowed down to 100, out of which, five are British. We spoke to Christine Rigby, one of these final applicants to see why she wants to embark on the one-way journey to Mars.

CM: Hello, Alison! Thanks for joining us today at The Angry Microwave, would you like to explain a little bit about yourself and what your currently do?

CR: Glad to be here. I’m a science laboratory technician in a south London secondary school. I’m 35 years old and now a round three, Mars One candidate.

CM: Would you like to explain a little about the Mars One programme?

CR: Sure, The MarsOne Foundation is a not-for-profit company based in the Netherlands. There mission is to establish a human colony on Mars. They intend to send international crews of four people to the colony every two years and by doing so, entertain and inspire the world.

CM: How has the application process been for you so far?

CR: Up until recently the application process has been quite painless. I’ve been asked to submit information periodically over the past two years including a medical screening and an interview.

CM: Has it been competitive, with their originally being 200,000+ applicants?

CR: No, the UK candidates I have met and the candidates with whom I have spoken have all been very supportive of each other. That may change in these latter stages.

CM: Obviously, the most important question is why do you want to go to Mars?

CR:  I want to do something great with my life. I want to inspire future generations to follow me into the stars. I also want to see Olympus Mons up close.

CM: Have you always been fascinated with space or has it been a recent discovery for yourself?

CR: I’m a big fan of science fiction and space in general. I grew up watching shuttle launches and space stations being built and I thought by now I’d be living and working in space. Unfortunately humanity hasn’t caught up with my dreams.

CM: The mission is famously one-way, but is there a glimmer of hope that if you were selected, that a few decades down the line, there would be a return trip?

CR: If the option for a return trip did arise after a decade or so on Mars, I’d have to think long and hard about returning to Earth. Not only would I have major health concerns about returning to a higher gravity planet after so long, but I’d be leaving the life I made for myself on Mars.

CM: Do you see the final applicants being remembered in history name, such as Buzz Aldrin and Neil Armstrong, or by the mission title?

CR: he individuals will most likely be remembered throughout history as Armstrong, Aldrin and Collins have been.

CM: Do you hope for your name to go down in history?

CR: It’s not my primary goal, but it’s an inevitable outcome of the mission. The first of any great endeavour will be famous.

CM: Could you see yourself having a family on Mars?

CR: Hmm. Difficult question. I’m the oldest of the UK candidates (not the oldest in the Mars 100) but in ten years I’ll be 45 and ten years after that when the colony is big enough for us to start having children, I believe I’ll be too old. I’d be very happy to help any expectant mothers up there though.

CM: It’s not only a technically hard mission, but you’ll also have to create a bond with the rest of the crew like no other, is this something you’ve thought about?

CR: I’d like to think of myself as a easy-going person, but living with people for a long time inevitably brings out the worst in someone eventually. My boyfriend and I, locked ourselves away for two weeks in December 2013 to see if we could cope and it was an eye opener. I started to feel real cabin fever and it was shocking. I believe that the right team will be able to identify and overcome these problems.

CM: How do you feel about the isolation of being on a different planet?

CR: We’d be alone with each other. Not completely isolated. It would be difficult to maintain a normal relationship with anyone on Earth with the limits to communication which are imposed, but tat is one of the things we will get used to during the years of training.

CM: You’ll not only have the pressure of the actual mission, but the world’s eyes will be watching you, is this something you’ve thought about?

CR: I’d like to say I’ve gotten used to the media attention, but it’s still very new to me. Unobtrusive cameras watching me in my daily life wouldn’t bother me as much as having to do press releases. The only concern is if my actions are viewed unfavourably and that impacts on my relationships with my team mates or my family back on Earth.

CM: Do you feel as if the reality TV show is something you signed up for as part of the package, or is it just a by-product of getting to Mars?

CR: It’s part of MarsOne’s plan so it’s something I’ve signed up for. They will be funding the mission with the sale of media rights for this iconic mission from selection to training to launch to landing.

CM: Why do you think you’re the right candidate for the mission?

CR: I believe that, based on the criteria given by MarsOne, I meet the requirments they are looking for. I’m intelligent, adaptable, I have a sense of humour and I have a real sense of why I want to go. It’s not a picnic, it’s a dangerous leap into the future.

CM: Do you hope to inspire future generations?

CR: That’s why I work in a school. I realise that I am one person, but if I can inspire two, or three or ten others to follow in my footsteps then I believe the world will be on the right track.

CM: Thanks for joining us, and best of luck with the process! Any closing words?

CR: I would encourage your readers to visit the Mars One website (www.mars-one.com) and read about the mission if they have any questions. If they are so inclined, and I hope they are, they can apply to be Mars One astronauts as I did when the application window opens again later this year. We’re an amazing species and look at what we can do.