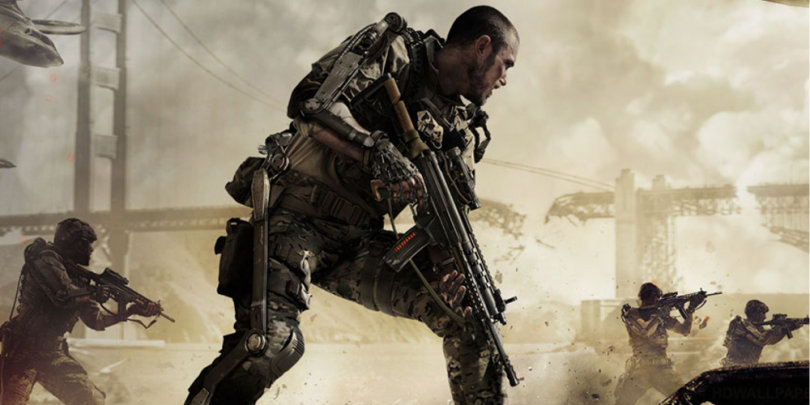 Another year, another Call of Duty game, what’s new? Quite a lot actually. The whole game is virtually based around the exo suit, giving the player a numerous amount of extra abilities, the main however being increased movement, whether that be dashing side-to-side, leaping forward or the double-jump.

The campaign of the game teaches you the ropes to the exo-suit, not that this is really needed for the rest of the game. The technological devices which you use throughout are very useful and change how you play the game, from choosing what grenade is best for the situation, from a threat grenade to pinpoint the enemies to a EMP grenade to disable enemy drones, all the way to exciting boat and hover-bike chases.

One of the things that is very off putting for me are the constant “interactive cut-scenes” where you are forced to walk down a very long guided route or stuck in a vehicle with only the ability to slightly look around, these moments often took me out of the action and made me frustrated very quickly.

In story terms, it’s not a reason on it’s own to buy the game but it does offer some great action sequences, the attempt of a plot twist towards the end kind of falls flat with not much build up.

The acting in campaign is spearheaded by Kevin Spacey, and of that it really is all about him, he outshines everyone else in the scenes with everything revolving round him. It’s a shame that they didn’t utilise Troy Baker who portrays Private Mitchell, the character you play as.

Now, let’s go into the multiplayer weapons of Advanced Warfare. Sledgehammer has tried reinvigorate the weapon system in advanced warfare to a varying degree of success. Having introduced a system of rarity to weapons which has an effect on the stats of the weapon along with the physical appearance. These “Upgrades” of guns are obtained through supply drops which are randomly obtained during multiplayer matches. The weapons are then stored in the armoury from there you can equip what you want to each class.

Of course it’s always personal preference to which gun you use as it is down to how you play. With Advance Warfare’s map appearing smaller due to the new found speed of gameplay with the exo-skeleton single shot weapons such as the MK14 and burst fire weapons such as the ARX are not as effective, I’ve rarely come across a player who has solidly being performing well while using them.

The most popular weapon I have seen being used is the BAL 27, perhaps it is because it is already unlocked when you start the game but it seems to be dependable and is effective at both long and short range. Other notable assault rifles would be the AK12 and the HBRA3. I would say assault rifles are the way forward in Advanced Warfare due to the superiority over SMGs at a mid-long range.

In many of the older Call of Duty’s going back to the early days of COD4-MW2 the guns of choice were always Sub Machine guns, the MP5, the 1 shot headshot MP40 on World at War and the UMP45 were vastly superior to most other guns. Don’t get me wrong SMG’s are still going strong in AW but they seem to be lacking the long range. The most popular SMG would be the KF5 perhaps due to it having a significant amount of damage and having the longest range in the class. Coming up against the BAL though, the BAL’s high rate of fire puts it on par with it at close quarters KF5 yet has a longer range. Of course due to the new system of gaining upgraded weapons through the supply drops it can help bridge gaps but also extend the old ones. For example there is an elite version of the BAL called the ‘Inferno’ with decreased accuracy but increased fire rate which I would say makes it more effective than any SMG at close range. Surprisingly in this call of duty they have introduced a burst fire SMG which is the last unlock in the sub machine gun category which gives players a different choice. Other notable mentions in the SMG category would be the ASM1 which has the highest damage by a long way in the class.

Sniping in Advanced Warfare is similar to the past couple of Call of Duty’s. Only 4 Snipers in the category, only one of them being a single shot “bolt action” type, the rest being semi-automatic. My personal favourite being the MORS the single shot rifle. The rifles are very interesting this year with the final 2 sniper rifles in the class having different abilities. Firstly the NA-45 which has 2 rounds per magazine, the first being an explosive which goes off once the second round hits nearby, it’s something different, not sure how effective it is going to be though. Finally the ATLAS 20mm, the highest damage sniper which is shoulder mounted only, so no ‘no scopes’ available with it.

I haven’t really seen many shotguns being used in game, but due to the create a class system overkill is a good option to have on many classes so could be used to good effect. If you’re like me and you haven’t found a secondary that suits you, maybe overkill and a shotgun is the set-up you need.

Touching on the subject of secondary weapons, the RW1 seems to be the go to secondary of choice with its 1 shot kill capability at short range but there is one to suit most people with a semi auto, automatic and a burst fire options available.

Overall at this stage the game seems very balance with the weapon rarity system adding in new options which the player can use to their advantage, as in all game there are guns which seem better than others but so far there isn’t an outright favourite which may change in the coming weeks when patches come out to tweak things before the inevitable DLC guns which may upset the near perfect balance.

The multiplayer game modes are more diverse than ever, featuring old and new favourites. A particular favourite is Uplink, virtually a game of basketball with a futuristic twist, this really brings out a competitive side to the multiplayer which I’ve personally been lacking in past years, it also encourages teamwork and different ways to play this mode, choosing whether to make a single run or working as a team, passing back and forth to the objective.

The level design has had to encompass the new jumping mechanics, creating a more open map with many routes to get to the other side. This has been accomplished perfectly, with often three levels of height running at one time. This makes for interesting use of the mini-map in modes such as Kill Confirmed and Search & Destory.

Exo survival is the third and final segment to the game, it’s basically a rehash of the similar mode in Modern Warfare 3 with waves of enemies progressing in difficulty in multiplayer maps. You can utilise this mode to learn the maps or to build up teamwork with other players however I found this mode to become very repetitive and doesn’t have the charm of zombies (be sure to watch out for a certain teaser once you’ve “completed” this mode).

The game really benefits from being on the new three-year development cycle for Call of Duty, it offers time to expand and build upon experimental ideas, something that the previous entries have failed to even attempt, possibly due to time constraints. It will be interesting to see where the series goes from here as movement with the exo suit now feels very slow and backwards, maybe back to WW1? We’ll see, but in the meantime, this brings a much needed breath of fresh-air to the series.