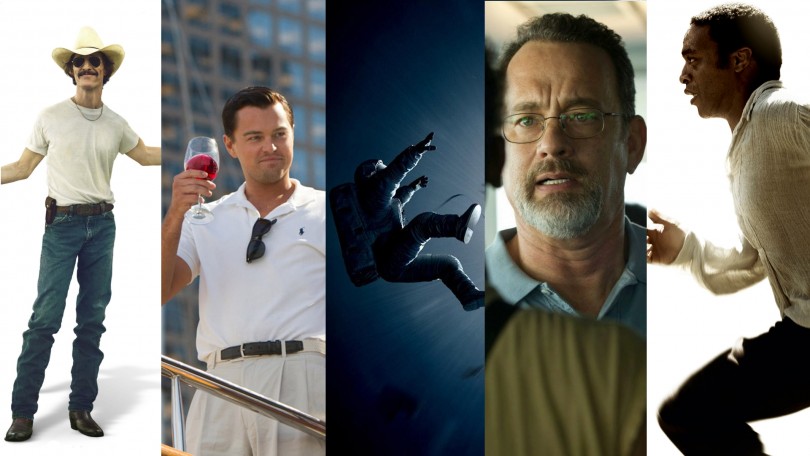 Gravity. A film that is ground-breaking in its visual achievements and even managed to convince respected critics, such a Mark Kermode, that 3D can work when used to aid the narrative. Gravity deserves its recognition and place amongst this years top contenders, and its innovative film making should certainly be praised. The film is thoroughly gripping, and the two central (and only) performances incredibly absorbing.

However, when comparing the film to others on the list, I cannot help but feel that Gravity provoked less of an emotional response. In another year, Gravity would be higher up in my top 5. I just feel the other four films will stand the test of time because the storytelling was far stronger. A brilliant film nonetheless.

4 – The Wolf of Wall Street

If you have watched our video review, you know exactly how much I loved Martin Scorsese’s The Wolf Of Wall Street. The extremely energetic and charismatic portrayal of Jordan Belfort’s rise and fall is played magnificently by Leonardo DiCaprio. Jonah Hill gives an equally incredible performance in what is a true return to form from Scorsese.

The explicit nature of the did not phase me as much as did many viewers. However, occasionally we are shown graphic content that is not completely necessary for the progression of the story. This unfortunately means the 3 hour run time feels bloated in parts. A unique film that can drag at times, but the roller-coaster journey more than makes up for the occasional dip in storytelling.

A surprisingly well paced film that is set almost entirely at sea, Captain Philips is one of the more surprising absentees heading into the Oscars. Despite its 6 nominations, there is no nod for Tom Hanks in his leading role, or for Paul Greengrass and his fantastic job at helming the project. Hanks is most definitively at his best, and the final moments of the film are so emotionally charged that even the most masculine of movie-goers will feel a tear slipping out.

As is expected with a Greengrass production, shaky-cam is frequent throughout. This is extremely effective for a film of this nature, giving the audience a real sense of uncertainty on the ship. It can get too much at times, and the events slightly repetitive, but the approach to retelling the true story captures the atmosphere so well that Captain Philips truly is one of the greatest films of the past year.

This years Oscar favourite is truly a remarkable piece of art. I can honestly say that I have not seen a film so beautifully shot in a very long time. Every member of the cast is evidentially devoted to their role, and the outcome is extremely powerful. I have a feeling the film will lose out on several key awards at the Oscars, but more on that in a future article.

Alfonso Cuaran is favourite to take home the award of best director for his work on Gravity. I will argue with anyone that it is Steve McQueen who deserves the award for one simple reason. 12 Years a Slave will be timeless, and in several years will be the film that many will remember when reflecting on 2013.

In what I can imagine to be a surprise to many of you, Dallas Buyers Club is my favourite of the Oscar nominated films. What makes this film stand out from the others is simple. Charm. Matthew McConaughey’s performance brings to life the incredible story of Ron Woodroof, a rodeo who is told he has HIV and only 30 days to live. Although not initially a sympathetic character, the pacing of the film and the character development transitions the events effortlessly.

Although the film contains heart, it also touches on some very intriguing issues that are still relatable to modern day. Subjects such as homophobia, corporatism and the inevitability of death. Yet the film does attempt shove all of this in your face, instead these themes are underlining to the film main focus.. the characters.

Dallas Buyers Club edges out 12 Years a Slave due to one key factor. 12 years on few occasions, and only a few, can appear somewhat pretentious. Long shots of woodlands and nature are there to generate the feeling of time passing painstakingly slowly. And it works for the most part. But Dallas Buyers Club is film that feels genuine and without agenda.

So as you would have gathered by now, there are several noticeable absentees. American Hustle being the biggest casualty. For me, the film has generated too much buzz for its quality heading into the Oscars, especially when you consider the quality of the 5 films above. With exception to Amy Adams’ nod for best supporting actress, there are far more worth while winners in other categories.

So that’s it. These are my personal favourite Oscar nominated film for this years ceremony. Tell us your favourites, do you agree or disagree with my list? Stay tuned for my Oscar predictions in the next few weeks!