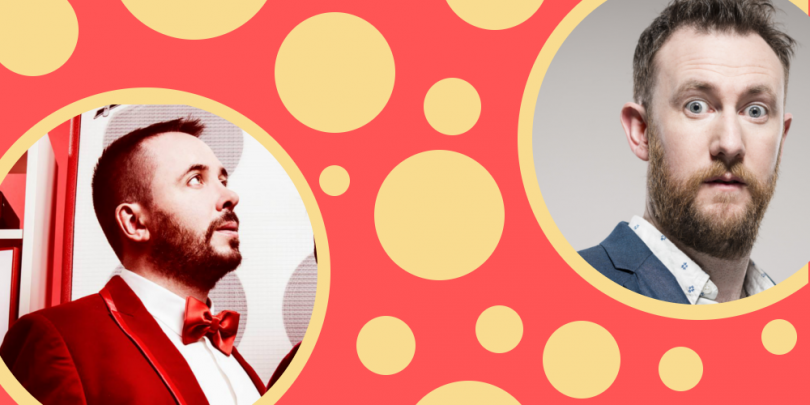 It’s that time of the year again, the Edinburgh Fringe is just around the corner and The Angry Microwave coverage is just beginning!

We thought where better to start that talking about the returning shows to the festival that we already know are stand-outs. We’ve hand picked two shows that appeared at last year’s Fringe and are returning for one more run, giving you a chance to either catch it for the first time, or experience the brilliance once again.

Abandoman are an Irish improv-comedy-rap act, as crazy as it sounds, it’s mesmerising to watch. Rob Broderick will take your suggestions and seamless

Here’s a clip from a few years back when they supported Ed Sheeran at Brixton Academy – expect more antics like this!

One the reasons we loved Hot Desk so much is first of all, it’s in the giant, upside-down purple cow which always provides a great atmosphere, but foremost, there’s actually a narrative running throughout the show which incorporates all of the audience inputs, of which there are loads, and it’s all collected nicely at the end.

Abandoman: Hot Desk will be at the Underbelly, George Square at 18:05 from the 17th to the 19th August 2015, tickets can be purchased by clicking here.

If you like Abandoman and you’re into musical comedy, you’ll also be sure to love The Horne Section with their new show at the Gilded Balloon titled, The Horne Section’s Questions Sessions which features Alex Horne, leading us onto…

The show that’s more than just an hour of stand-up, it’s hard to talk about this show with spoiling the feeling of walking into the room and being revealed what’s on the stage floor.

The hour will take you on a journey through Alex Horne’s life, often watching it all fall apart (you’ll get this phrase if you see the show) – it really is something that gets the crowd all behind him.

I’ve been lucky enough to see this show multiple times, I’m happy to say that given the nature of the show, nothing key is set-up, making it worthwhile seeing it again if you’ve already been!

Alex Horne: Monsieur Butterfly will be at the Pleasance Courtyard at 19:00 from the 15th to the 29th August 2015, tickets can be purchased by clicking here.