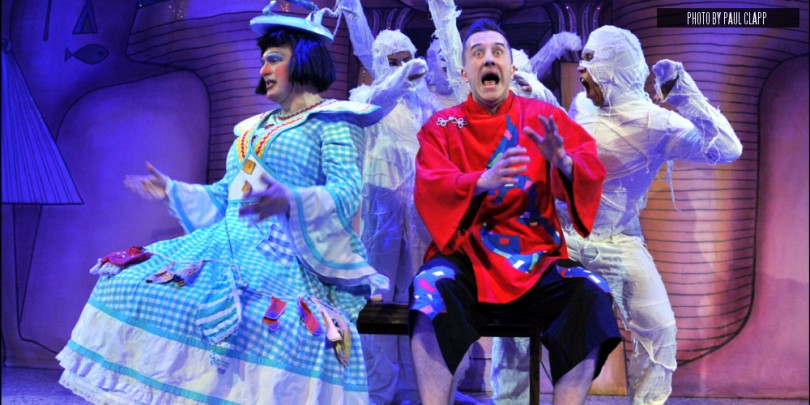 The annual Marlowe Theatre pantomime is arguably Kent’s best, this year’s “Aladdin” lives up to the reputation. Expect a fun-filled show full of all the usual mischief.

The supporting cast makes the show what it is, outshining the lead roles by far – not by fault of themselves. Ben Roddy, is in full panto drag again as Widow Twankey  (sorry to spoil the fact she isn’t actually a female), living up once again to the high standards that Dave Lee set during his landmark years in the productions at the theatre. Joining Roddy again, is his partner in crime, Lloyd Hollett, the chemistry between the two are great, especially in the hilarious “12 Days of Christmas” routine, but unfortunately we don’t get to see as much of Hollett compared to previous years. This is one of the very few gripes I have with the panto, with so many great supporting actors, whenever the story progresses with Aladdin and Princess Jasmine, i’m left wanting this scene to hurry up so I can get back to the chaos and mischief. Other notable mentions go to Masashi Fujimoto, Sabrina Aloueche and Bentley Kalu who fulfil their roles with their own unique charm. Phil Gallagher, aka Mister Maker from Cbeebies, has a great chemistry with children in the crowd and is able to quickly adapt to the audience interaction with them in the second half. The leads, David Albury as Aladdin, Rose O’Reilly as Princess Jasmine and Scott Maslen as Abanazar all do a great job, Maslen’s role is cleverly shaped around his acting career  which is nice to see it acknowledged throughout.

There are some spectacular set pieces throughout, from bringing Aladdin’s carpet to life all the way to meeting a few larger than life friends. Along with these visual impressive scenes, we also get the Marlowe traditions, from the token Isle of Sheppey joke to the Ghostbusters bench gag – the latter being greatly received by the audience as always. There is lots of subtle adult humour that will go over children’s heads which will keep the adults entertained.

One of the new additions is the orchestra being on the balconies, this was only a little change, but as someone who is fascinated with production of live events, it was a great insight to what goes on behind the scenes. Also, I wont say much to avoid a major spoiler, but Chris Wong (musical director) has a brilliant involvement in this year’s production.

Aladdin at The Marlowe Theatre runs until Sunday 11th January 2015, tickets can be purchased here: www.marlowetheatre.com/page/3009/Pantomime/642